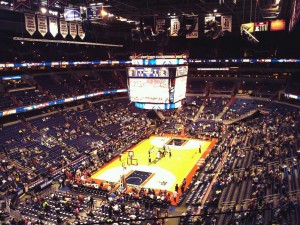 OK, so the headline is a little misleading. The Washington Wizards actually lost a close one on Tuesday, 111-106 to the Brooklyn Nets in overtime. But given the current state of our nation’s capital, I felt it was rather fitting.

Positives
The Wizards starting five managed to hold their own in the first quarter, going up against this season’s much fancied Nets. The Wizards only trailed by four points at the end of the first, when both coaches decided to change things up.

Nene looked healthy and led the Wiz’s scoring efforts, going 8-for-11 for 19 points. If Nene can stay healthy, it could be a huge season for the Brazilian, which would definitely bolster the Wizards offensive output.

John Wall looked set to continue the form he possessed after his return from injury last season. The talismanic point guard recorded 16 points, eight assists and five rebounds. Wall is the Thanksgiving centerpiece to the whole ensemble, and if he can see out the year unscathed, he could be the difference in making this the Wizards’ first playoff appearance in seven years.

Glen Rice, Jr. showed plenty of confidence, scoring a late 12 points, including the game-tying dunk off a failed Eric Maynor jump shot. The two-pointer was originally cancelled out for basket interference, which frustrated the 9,743 attendees. A quick review saw the original decision overturned and forced the game into overtime.

The team managed to respond to a double-digit deficit late in the third quarter. Granted, head coach Randy Wittman threw his stronger caliber players against a third-string Nets side, but give the team credit for showing some hustle and insisting to be taken seriously as a playoff contender.

Negatives
Jan Vesely didn’t do much to silence his critics. He managed a meager three points in 28 minutes and eventually fouled out of the game in overtime. A silver lining for Vesely would be the 12 rebounds he managed to collect. Is that enough to reward the Czech with a rumored $4.5 million contract? It certainly doesn’t hurt his chances. Vesely’s willingness to work in both the Summer League and FIBA European Championships is impressive. His development will be interesting to watch.

The injured Emeka Okafor’s lack of presence was a huge sore point for the Wizards. This resulted in the Nets scoring all too easily, especially when the man-mountain Brook Lopez was on court. The interesting debate here will be who in the Wizards camp will step up and fill the center position while he’s out.

The outside shooting of the Wizards was almost non-existent. The team went 2-for-11 from deep, Martell Webster the sole player able to connect. Bradley Beal went 0-for-3 and Glen Rice, Jr. 0-for-4. Trevor Ariza did a nice job shooting from outside last year while Beal was injured.

Villain of the night
Andray “Zero reminds me how everybody gave up on me” Blatche. D.C. has no love for that man. At all. Blatche was met with boos every time he came in contact with the ball.

Loudest cheer of the night
In conjunction with a renowned fast food chain that doesn’t open on Sundays, if a Wizards opponent misses both free throws, everyone at the arena wins a chicken sandwich. I would like to thank Mason Plumlee for the generous donation to my ever growing waistband.

Following the defeat, the Wizards traveled to Rio, Brazil for Saturday’s exhibition against Chicago. The state of hysteria concerning the homegrown Nene is a welcome sight. The red, white and blue then return to the Verizon Center to face the Miami Heat on October 15.