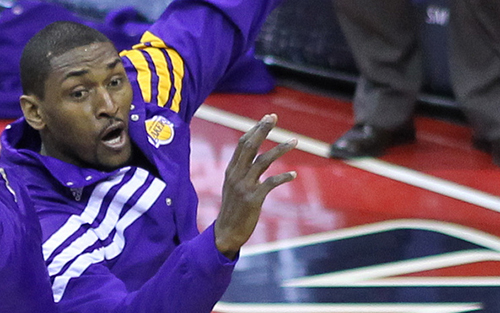 This offseason, the Los Angeles Lakers lost one of the most entertaining players in the league, a physical beast capable of altering games with defensive hustle and punishing opponents in the post. A positive presence in the locker room and a charming jokester with the press, he was a truly great performer and will be sorely missed. Though the Lakers may be better without him, losing a magnetic personality and dedicated athlete never sits well.

I’m speaking, of course, about Metta World Peace, the endlessly entertaining small forward who held court in the Staples Center for the past four years. A student of the game willing to accept Kobe Bryant’s domineering tutelage and the most confident, consistent media subject on the squad, Metta was the Lakers’ ambassador to the world, the everyman on the inside that gave the fans full access to the locker room. Kobe was and remains the face, the symbol of the Lakers, but his self-manifested mystique prevents the same level of connection. When was the last time the Mamba joined fans for an impromptu dodgeball game?

Rather than recall his Lakers highlights (it would take far too long), let’s jump straight to his new gig with the New York Knicks, where he is already up to the same absurdity that will make him so missed in Los Angeles.

First came the continued loyalty to Kobe and the assertion that the Lakers will reach the NBA Finals, despite every pundit on earth and general logic screaming to the contrary. Why stop at a Finals berth, you ask? Metta’s championship pedigree gives him reason to believe the Knicks will bring home their first ring since 1973, his role, along with Tyson Chandler, to provide veteran guidance and clutch experience. When he won with the Lakers, he played the lockdown defender, the hard-nosed, human wrecking ball who came through with the occasional corner three when the team needed it most.

Now he’s singing another tune, claiming that the Knicks don’t need to up their physicality, they need to play with more intelligence. He’s not wrong, but given Chandler’s status as the lone physical presence on defense, excepting Iman Shumpert and the 30 or so games Carmelo decides to care, a more physical game is exactly what they need. The current roster is a far cry from the scrappy Knicks squads Metta is referencing and, to be fair, Metta is not necessarily known for his basketball IQ. Not to diminish his court intelligence in any way, because he is a smart player (most of the time), but when you sign the artist formerly known as Ron Artest, you’re looking for a bruiser, not a brainiac.

Even better than slightly skewed strategy talks, he’s finally living up to his potential and starring in his very own television show, “Metta’s World.” He spends the first episode interviewing various members of the Knicks, asking the kind of absurd and off-topic questions that could only come from a comic genius. Grilling teammates about their flyest personality trait, their next scheduled haircut, the purpose of bananas and, the true gem, “The people of New York want to know, what’s your favorite toe?” Metta manages to mine fresh material out of well-trodden ground, giving definitive proof to his destined post-basketball career as a general entertainer.

To round off the clip, Metta approaches two junior reporters, still in grade school, and asks them a series of queries about their class, school, age, birthday and opinion of spaghetti, not stopping until he finds the common thread between them. A genuinely gregarious individual, loyal and dedicated to his past and present teammates, Metta is one of the most positive and affecting personalities in the league, an achievement even more impressive considering his long climb out of the doghouse following the Malice at the Palace. Los Angeles will miss him, but as long as he keeps delivering quality content and solid play, I can rest easy knowing that the league has a benevolent watchdog, prowling the streets and stadiums and bestowing good cheer across this great land.