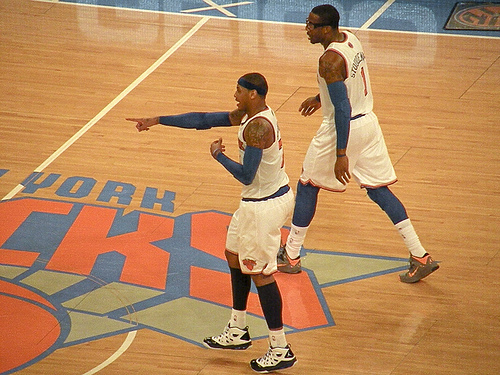 This game was not as close as the score suggests. The New York Knicks lacked any sort of interior presence, and that, combined with some mystifying double-teams and horrendous switches, led to the Spurs scoring at will. It took only two passes for the Knicks D to be completely flummoxed, which always seemed to result in Danny Green being left wide open. The Knicks got burned for their lack of execution, with Green scoring a game-high 24 points, going 6-of-9 from three. He also got 10 rebounds, which is what happens when Andrea Bargnani and Amare Stoudemire split time at center. By the way, those two combined for a grand total of three boards. Yea!

I know it’s still early and the Knicks are playing without Chandler and the Spurs are good, but it might be time to panic. You have to wonder what’s going on with a team that can’t defend for a full possession, can’t get any sort of offensive flow going and is only consistent in the sense that every time they play at home, they immediately go down by double digits and never recover. Coach Mike Woodson may not have been given the most complementary pieces to work with, but he needs to figure out lineups that produce results sooner rather than later (isn’t that what the preseason’s for?) or owner Jim Dolan is going to unleash holy hell, either by firing him or doing something crazy to the roster. As bad as the Knicks players have been individually, right now the brunt of the blame falls on the coaching staff. Over the first six games of the season, the Knicks have simply not come out ready to play.

– Andrea Bargnani didn’t have the best game defensively, but at the very least, it was good to see the timely spunk he showed in Charlotte was not an aberration. Andrea remained aggressive on offense, putting up shots with confidence and getting to the line with some nice dribble moves and pump fakes. Somewhere down the road, I imagine a second unit led by J.R. and Bargnani where the points flow in the manner in which points flow. Until that day, do rebounding drills, Andrea. Next offseason I want you traveling into the mountains with Dennis Rodman to study the teachings of the worm.

– Fresh off his suspension for smoking weed, J.R. Smith looked rusty as all hell. In what very well could have been his worst performance as a Knick, J.R. repeatedly spun and head butted his way into the teeth of the Spurs defense, only to realize he’d made a terrible mistake and shoot a godawful fall-away jumper. I’m pretty sure he both air-balled and shot one off the side of the backboard. To J.R.’s credit, he did notch three purdy assists, but those were swiftly negated when he inexplicably threw a pass into the crowd, about five feet away from his intended target. I have no doubt that Mr. Smith will get it going eventually, but boy was he awful today.

– If Iman Shumpert is planning on breaking out this season, now would be a good time. Shump has been far too tentative on offense, repeatedly passing up open looks in favor of unnecessary passes and outright refusing to drive into the lane. Part of it may be the awkward lineups Woody’s been throwing out there, but I think the biggest impediment to Iman at this point has been Tim Hardaway’s inexplicably high minute count. Dude played 19 today while Shump only got 22. With both of them struggling to find a rhythm right now, I think Woodson needs to go with the proven entity and let Iman eat into Timmy time. There’s no reason he should be playing less than 30 minutes a game, particularly when Hardaway A) hasn’t shot that well and B) repeatedly screws up on defense. Playing Hardaway this much and repeatedly threatening to insert J.R. into the starting lineup have not done Shump’s confidence any favors. Can you imagine how much smoother their offense would be if Iman played like the legitimate weapon that he is? Please give him more minutes, Woodson. Show Shump you care.

– I appreciate Melo trying to move the ball around this season, but if Woodson plans on playing him as much as he has—he inexplicably played 35 minutes in a game that was over at halftime—I wouldn’t mind seeing him demand the rock and shooting more. If we’re going to be taking awful shots that aren’t in the flow of the offense, I’d much rather take my chances with Melo than one of these other goons.

– Speaking of offensive flow, where the hell has Raymond Felton been? He’s been very un-Raymond-like in the early going, repeatedly chucking threes instead of driving into the lane and dishing off. Not sure if this has anything to do with that hammy injury, but thus far he has not been the floor general he was last season.

I’d rather not think about this game anymore. Get well soon, Knicks.