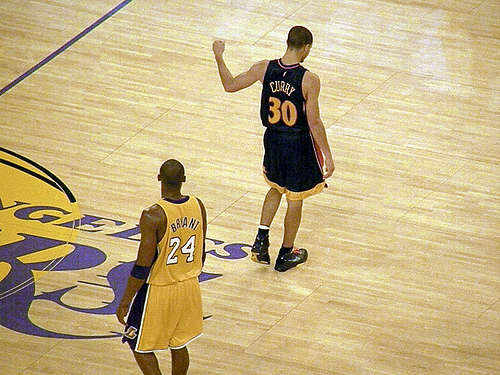 The last time that the Los Angeles Lakers (5-7) met the Golden State Warriors (8-4), it was disastrous. Coming off of a big win over the Los Angeles Clippers, the Lakers were unenthusiastic against the Warriors in the second of back-to-back games.

For the Warriors, it was their season opener, and Klay Thompson scored a career-high 38 points. That’s more than the Lakers’ top two scorers in that game combined. The purple and gold also started Nick Young, Shawne Williams, Pau Gasol, Jodie Meeks, and Steve Blake, which is much different from now.

The Lakers have been changing around their starting lineup a lot, but the last game coach Mike D’Antoni chose to start Wesley Johnson, Jordan Hill, Gasol, Meeks, and Blake. They’ll likely be the starters for this game as well.
Hill has been huge on both sides of the ball, and is only continuing to get better. He said:

“I get more confidence every time I step on the floor. We don’t have Steve Nash. We don’t have Kobe. We’ve got guys that we know have to step up. We’re banding together as a team.”

The big man will almost certainly affect the way the Warriors play because he clogs up the paint. Another advantage for the Lakers is that this is a home game after a four-day break, so they should be well-rested and ready to go. Whereas the Warriors played on Wednesday and will have to travel.

As for the Warriors, they may be without Stephen Curry. The guard missed the last game—which was a loss that snapped a four-game win streak—because of a “mild concussion,” and there’s still no word about if he’s expected to play on Friday. Coach Mark Jackson said:

“Obviously he’s a big-time player and not having him hurts us. Next guy stands up and we are a no-excuse basketball team and I thought my guys gave a great effort. They defended, battled and we fell short.”

Curry’s absence would be another advantage for the Lakers as well.

Since both of these teams like to shoot, it may just come down to who is hotter from downtown. The Lakers currently allow 103.8 points against them on average, which speaks to their lack of defense.

The last storyline going into this game is that of Kobe Bryant, who practiced with his teammates this week. There’s no reason to think that this will be the game the Black Mamba makes his return, though.