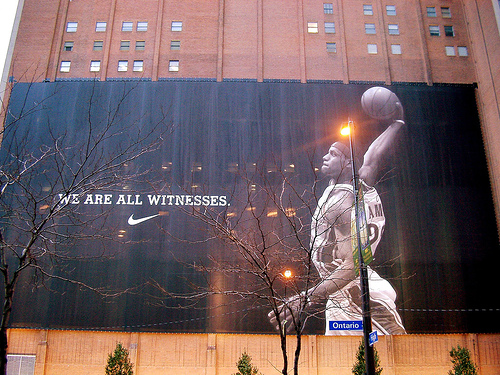 “I only watch the last two minutes of the game cuz that’s when it really starts.” My buddy Jay said that as he sat down next to me to watch the greatest game ever by a Cleveland Cavaliers player.

It was June 1, 2007. LeBron James scored the last twenty-five points (29 of the last 30) of Game 5 of the Eastern Conference Finals. I can’t really remember all the details, but I remember how I felt watching that game. I remember how I felt after it was over as Jay and I got in his Chevy Cavalier (HA!) and drove it all around the city honking at people outside of bars as they exited. People we didn’t even know or wouldn’t even approach otherwise, much less stop the car to get out and hug, rubbing our sweaty bodies against each other like animals. If you take away our computers, language and clothes that’s exactly what we are. Animals.

We didn’t even win anything. The Cavs didn’t even win the series until the next game, when Daniel “Boobie” Gibson broke out and became a local folk hero. But it was already won and we knew it. We felt it. It’s amazing how sometimes moments in sports can freeze time and take you back like a time machine. You can remember what it sounded like, what it looked like, and what it smelled like. And that guy smelled like beer and chicken wings – that my friends, is the smell of victory.

I graduated from high school a couple of days later. I say a couple of days because I don’t exactly remember. I don’t remember that, or what I did afterward, but I can remember the day King James went off for 25 against the Detroit Pistons in overtime.

Fast forward almost exactly three years later. Everyone in the city of Cleveland was glued to their TVs on a certain four letter network. Everybody was sure that LeBron James was going to stay. Then Chris Broussard came on and said he was going to Miami. Nobody believed it: “What does Chris Broussard know?” “He’s not only a broadcaster, he’s a mind reader.” And the rest… as they say… is history…

Three years later, two championships and two MVP’s later, I, as an individual, not speaking for anyone else, have had an awakening. I hated a man I didn’t even know for a long time, and I realize that that was silly. He is a basketball player, not my father. LeBron had no obligation to stay, the same way a telemarketer has no obligation to keep working at their current job. As for how he did it, okay maybe it wasn’t the greatest way to go about it, but I am around the same age as he was when it happened, and I do a lot of things that are stupid and silly that I’m going to regret.

I see these LeBron billboards that are up now, in anticipation of his return to Cleveland to play the Cavs, begging him to come back. I’m not going to do that. I am not going to beg or call him out for “quitting.” I am not going to stoop to that, but I am not judging the people that are, because I understand. They want other kids to meet strangers at bars and get covered in sweat, and forget the day they graduated, and get people to watch more than the last two minutes of a basketball game. In this city, a city that is painted Brown and Orange 365 days a year, LeBron James showed us what a great basketball player, when he plays the game right, it isn’t just a game – it’s poetry.

Today with the benefit of hindsight, if I ever met LeBron, I would thank him for giving me seven great years and making me and millions of other fans love the game of basketball.