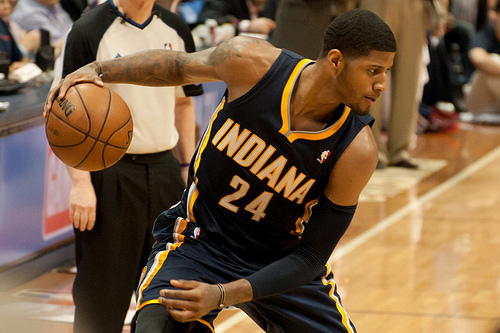 There was a point in time when I thought killing endangered species was a bad thing. You know, those fat, funny-looking fish swimming around south Florida? Manatees I think they call them. I thought it would be totally wrong to not help them survive. Blue whales, baby seals, panda bears and the like should be allowed to live and thrive.

Bobcats are an endangered species too, particularly with the recent announcement that next year the team in Charlotte will return with the Hornets moniker and drop the Bobcats altogether. The Indiana Pacers were the nasty predators who beat them down at the Time Warner Cable Arena last night. The Pacers came with rifles in hand – particularly in the fourth quarter. When the smoke cleared, the current Charlotte Bobcats were just another head on the wall of the Pacers victory room as the blue and gold won handily, a game in which they never trailed, 99-74 for their 14th victory of the young season.

The story of the night was, as usual, the second-half adjustments the Pacers made after relinquishing an 11-point first quarter lead. Notably those adjustments came in the form of one C.J. Watson who had an absolutely unbelievable shooting night in the second half, including 6-for-7 from beyond the arc. Indiana dropped a whopping 39 points in the fourth and delivered the knockout punch through their usually stout defense.

In addition to the Pacer’s defense, their bench has proven itself out as the premiere bench in the league. Larry Bird seems to have found fire in a bottle with the bench he so carefully constructed during the offseason. Against the Boston Celtics on Monday, it was Luis Scola and Ian Mahinmi came up big and tonight it was Watson’s turn. By the fourth quarter, the Pacers just seemed to wear down their opponents and are able to dominate the final 12 minutes of virtually any game. They are deep, and last night they played every man on the roster for at least one minute.

The Pacers have shown very little weakness over the first month of the season. Defense, offense, half court or full court, they seem to be able to show up and play the style necessary to win the game, no matter who they match up against. They have consistently played from behind at halftime and have nearly, perfectly made those adjustments necessary to win the game. The Pacers lone loss came against the Chicago Bulls a few weeks ago at the United Center.

Now it’s back home to face the Washington Wizards who will be without starting two-guard, Bradley Beal when they come to town. They will also be in the midst of a short two-game road trip when they arrive in Indianapolis. The contest should be a fairly easy one for the blue and gold as long as they don’t look ahead.
Looking ahead can be dangerous.

Will Smith was in a movie this past summer called “After Earth” in which he told his son, “Fear is not real. It is a product of thoughts you create. Do not misunderstand me. Danger is very real. But fear is a choice.”

If the Pacers can hold onto that mindset for the start of their road trip and continue to focus on those things that brought them to their 14-1 record, they should be able to navigate this very challenging west coast trip against, in order: Los Angeles Clippers, Portland Trail Blazers, Utah Jazz, San Antonio Spurs and Oklahoma City Thunder. The top four teams in the Western Conference along with the cellar-dwelling Jazz.

I guess the real question is if it’s possible to go from predator to prey in that short a time.