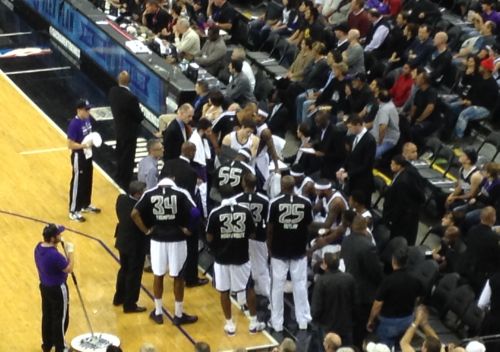 In order to compete in today’s NBA, most of the contending teams feature two or three star level talents. For more than ten years, the San Antonio Spurs’ big three of Tim Duncan, Tony Parker and Manu Ginobilli have racked up wins and NBA titles. Over the same time span, the Sacramento Kings have struggled to acquire or develop one star, let alone multiple stars as teammates.

Despite losing 104-112 Sunday in San Antonio, Sacramento demonstrated that it may be developing a big three of its own.

Despite the loss, DeMarcus Cousins (29 points and 14 rebounds) continued his string of impressive performances against the league’s top teams. Following his thrashing of the Miami Heat on Friday, Cousins faced up against Duncan and more than held his own against the All-Defensive legend.

The difference for Cousins and the Kings over the past few weeks has been the complimentary star-level stat lines from teammates Rudy Gay and Isaiah Thomas. Gay has had the occasional off-game as a King but has been far more efficient and again provided a second scorer for the team with 24 points Sunday. Thomas, the final member of the Kings talented tri-pod contributed his usual efficient scoring with 27 and, perhaps more importantly, nine dimes in pacing the team’s offense.

Unfortunately for the Kings, the Spurs have been doing the big three thing for far longer and have also developed a club with better defensive intensity and complimentary pieces.

Defending perimeter players has been a problem for the Kings all season, which was a major problem against a backcourt featuring talents like Tony Parker and Manu Ginobili. Healthier than he has been in years, Ginobili has been playing terrific basketball the last few weeks and he carved up the porous Kings defense both inside and from behind the three-point line.

Rookie Ben McLemore looked as raw as expected trying to contain the crafty veteran and, unfortunately, the Kings lack a defensive-minded alternative. Parker chipped in with a relatively quiet 22 points and 7 assists but was a significant factor down the stretch.

There were plenty of opportunities for the Kings as they hung close with the Spurs in the first half and then erupted for a huge 38-point third quarter. Featuring a less iso-heavy offense, the Kings stars shared the ball and created scoring opportunities for each other while competing more effectively on the defensive side of the ball. They received little support from the rest of their team but still took a lead into the fourth.

Down the stretch, the Spurs tightened up their defense and the Kings blew a number of scoring opportunities while handing the lead over to the Spurs. With the momentum shifting, the Kings fell back to one-on-one play and the easy baskets from the prior quarter disappeared. With Cousins suddenly struggling to score against Duncan, and Gay forgotten on offense, the Spurs went exclusively to their big three on offense and closed out the game.

There are always lessons to be learned from the most experienced and successful trio in the league. While the game is another notch in the loss column for the Kings, hopefully it’s one that the Kings young core can build upon.