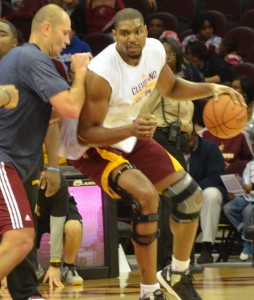 For those of us enamored of the sport who happen to spend most of our time around others similarly inclined, it’s easy to forget that basketball is not a universal passion. Even for a natural athlete who can float toward the rim with grace, or a physical specimen blessed with remarkable height and strength, the game can feel dull or chore-like if the rhythm of the dance doesn’t speak to him. For the high school benchwarmers come weekend warriors among us, this dynamic is difficult to imagine: a sort of King Midas dilemma where those gifted with exactly what we desire most throw it away indolently. But is this perception unfair?

Enter Andrew Bynum, oft-injured and oft-sulking, but of tremendous talent with stretches of undeniably elite performance to his name. Rumblings about character issues began during his Los Angeles Lakers days, accompanied by flashes of on-court malice, and in the aftermath of the Dwightmare, concerns have only become more inflamed.

Last season, Bynum was maligned for his sloppy appearance on the Philadelphia 76ers bench, while accusations of apathetic rehab on his chronically injured knees further fouled the air. Now, just months after signing a two-year, $24 million dollar deal with the Cleveland Cavaliers (only $6M guaranteed), Bynum has been suspended for conduct detrimental to the franchise, reportedly forcing his employer’s hand by exhibiting consistently disrespectful behavior toward staff and casting a pall over team proceedings. Most damning of all, reports have emerged that insist he just doesn’t like basketball very much. In a league defined by competitive fire and sacrifice, it’s hard to imagine a more concerning character trait than apathy.

But if Andrew Bynum doesn’t enjoy basketball, he isn’t obligated to play it. Many tall young men are pressured into the sport at a young age and end up cajoled by authority figures into practicing jump hooks far more frequently than they would have on their own. Under the right conditions and with sufficient talent, these years spent unwillingly in a gymnasium can produce the same results as the dedicated efforts of an NBA aspirant. The end product of this cycle is often a young man who enjoys the trappings of basketball culture—free sneakers, notoriety on the AAU circuit, the social capital of being an athlete—but remains apathetic about the game itself. Bynum seems to fit this description; only money has entered the equation and become the primary motivator for his continued involvement in basketball.

There’s nothing wrong with this mentality, per se. Far be it from me to criticize someone for pursuing a steady paycheck where they can get it. Heck, I believe there’s dignity to be had in putting effort into a craft you don’t enjoy. It’s when entitled sulking taints the pursuit of money that people like Bynum run into trouble. There’s no place for unprofessional, insolent behavior in the workplace, regardless of industry, and if he wanted out of Cleveland, Bynum could have handled his discontent with more tact.

That being said, I have sympathy for a man funneled toward a career he doesn’t enjoy. If this messy departure from Cleveland is his best effort at finally walking away from basketball, the imposed burden that has shackled him all his life, then he has my blessing. It’s fully within his rights to pursue other interests, regardless of the God-given gifts or earning potential he’s “wasting,” because he owes us nothing and happiness is paramount.

At the same time, if Mr. Bynum intends on using his petulance as a springboard to greener pastures and tries to parlay his newfound free agency into a minimum contract with a contender (as some sources have speculated he will), then he is worthy of scorn.

Or at least, he would be, if his story weren’t so sad and confusing.

There are only two consistent elements to Bynum’s narrative. The first is a persistent refusal to resolve any of the mysteries that shroud him. It seems that, no matter what happens, his career will always be fraught with questions of health, attitude, and motivation, and that the public will never know what to expect. The second is a far more personal, and perhaps an unwarranted diagnosis on my part, but one I will venture nonetheless:

I find it increasingly hard to shake the sense that all of Bynum’s belligerent behavior stems from a deep sense of frustration, confusion and sadness. He’s a man afflicted with a talent he didn’t ask for and an injury bug to boot, and he’s become torn between perceived obligations to himself, to others and to the world. As he copes longer and longer with the mental and physical tolls his profession exacts on him, we’re seeing more depression, anger and irrationality from a man reaching his breaking point.

So it’s hard to dismiss Andrew Bynum or to treat him with derision. He’s been given so much—things we weekend warriors would kill for—but like King Midas before him, it’s been a nightmare disguised as a dream. Bynum’s behavior may be frustrating, but perhaps it’s all just fallout from an unhappy man looking for a way out.

We may never know. It is Andrew Bynum, after all. But in situations like these the best course of action is often to take a step back, let go of our irritation and remember that these athletes on the court for our entertainment are also human beings… and fallible ones at that.