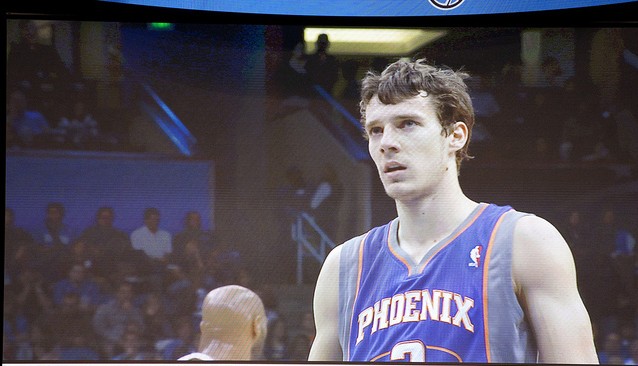 A big night from Goran Dragic helped the Phoenix Suns to a resounding victory over the Los Angeles Clippers on Monday night. The 107-88 win moved the Suns to 19-11, and dropped the Clippers to 21-12.

The Suns started the game on a 9-0 run, but the Clippers fought back with a 14-4 run to take a short-lived lead. Dragic’s 13 first-quarter points were enough to give Phoenix a 30-24 lead after 12 minutes. Los Angeles went cold in the second quarter; at one point, they went four minutes without a field goal. This allowed the Suns to open up a double-digit lead, and more poor shooting from L.A. (they went the final two minutes without scoring a single point) led to a 21-point halftime lead for Phoenix. It was much of the same in the second half, with the lead swelling to 29 at one point.

Dragic was the leading man for Phoenix in this one, as his 26 points, 8 assists and 5 steals led all players. Gerald Green finished with 21 points, 15 of which came on three-pointers. Markieff Morris had a big game off the bench for the Suns, finishing with 11 points and 12 rebounds, throwing in three assists, one block, and one steal. Overall, the Suns recorded 26 assists on 41 baskets–impressive considering an off-night from Eric Bledsoe (3-of-10 shooting, seven points, four assists). For the Clippers, Blake Griffin and Chris Paul combined for 26 points on 10-of-29 shooting, contributing to their team’s dismal performance. Jamal Crawford scored 15, Matt Barnes had 13 and DeAndre Jordan led all players with 19 rebounds. On the night, L.A. shot under 37 percent and turned it over 20 times.

Great win for the Suns, as they finish the month of December in style with a blowout road win over a very good team. Sixth-place Phoenix remains the league’s biggest surprise heading into 2014.

The Suns’ next game is on Thursday, when they return to Phoenix to face the Memphis Grizzlies.