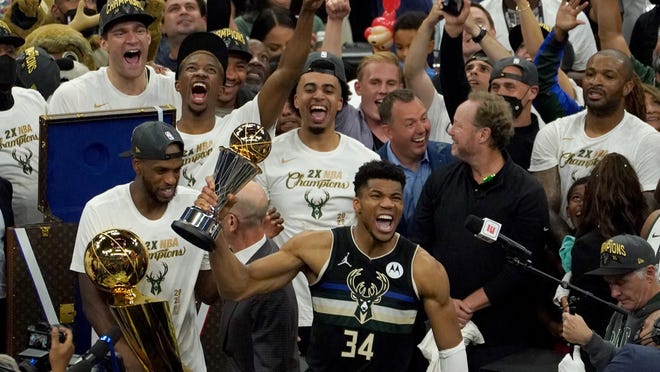 Giannis Antetokounmpo was awarded the 2021 NBA Finals MVP award after averaging 35.2 points, 13.2 rebounds and 5.0 assists while leading Milwaukee to a 4-2 series win over the Suns and the Bucks’ first title since 1971.

Though there was a bit of a groundswell for teammate Khris Middleton heading into Game 6, a 50-point, 14-rebound, 5-block masterpiece Tuesday by Giannis removed any shadow of a possibility of a hint of doubt as he won the award unanimously.

Middleton showed why he was worthy of mention, with his late jumper over Devin Booker essentially sealing the contest. His clutch shot making was instrumental in securing victory in Games 4 and 5 for Milwaukee. But while Middleton deserves his fair share of the credit, by the standards of the majority of recent Finals MVP awards, Antetokounmpo was the clear choice. Prior to this season, 10 of the last 20 Finals MVPs had been the highest-scoring individual in the series, and on 17 occasions, they were the top scorers on the Finals-winning team. Antetokounmpo not only led the Bucks but also the series overall with 35.2 points per game. The Athletic