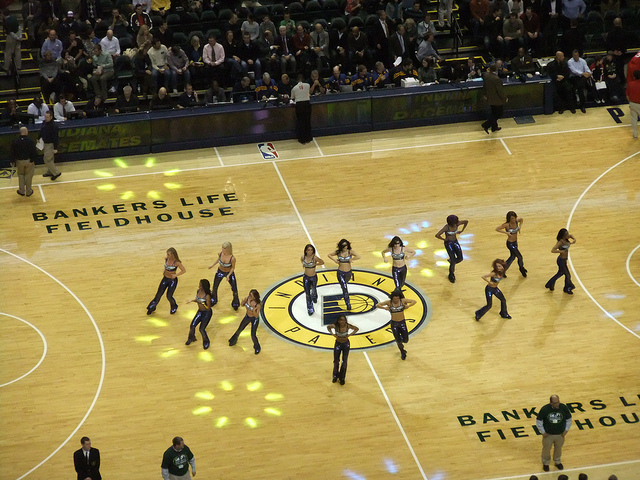 For a little over three quarters tonight at Bankers Life Fieldhouse, it seemed like the Cleveland Cavaliers were going to take the Indiana Pacers down to the wire in a tightly-contested Eastern Conference game. Then, with about eight minutes remaining, the Pacers put the clamps on the Cavs defensively and pulled out a win in front of a sellout crowd, 91-76.

The last regular season game of the 2013 calendar year turned out to be a solid defensive performance for the Pacers down the stretch. Cleveland had managed to score 100 points in eight of their last 10 games prior to tonight, but in the second half, Indiana managed to outscore them 50-32 and their 76 points proved to be their lowest output of the young season. Kyrie Irving finished the game with 10 points on 3-for-9 shooting, and their leading scorer with 14 was Anderson Varejao who also had 11 rebounds. The only other Cav to score in double figures on this night was Dion Waiters off the bench with 12 points.

Indiana had another solid performance from their starters, but perhaps the two most impactful players tonight were George Hill and Danny Granger. Hill had the unenviable task of guarding Irving all night, but did a fantastic job on the defensive end. This seemed to fuel him on the offensive end as he finished the game with 13 points and six rebounds in just over 34 minutes of play. Granger looked like he hadn’t missed a single game due to injury and finished an energy filled 18 minutes with 12 points and four rebounds and solid defensive play all around.

The Pacers as a team were out-rebounded 57-47, but held Cleveland to just over 36 percent shooting and forced 15 turnovers. They also outscored the Cavaliers in the paint by a decisive 42-26 edge, as Cleveland had no real answer for Roy Hibbert down low, who finished with 19 points and five blocks. Indiana played their typical first half, trailing 44-41 after two, and then turned it on late in the third and eventually dominated the fourth, pulling away by as many as 17 points.

The Pacers now have won four in a row, all by 15 or more points since their last loss to the Miami Heat. They face the Toronto Raptors tonight in the Air Canada Centre, who they beat by seven earlier this season at Bankers Life. The Pacers now visit a team at home who are in fourth place in the Eastern Conference and only one game below .500 for the season, beating the Chicago Bulls last night, 85-79, but are only 3-10 against teams over .500. The Raptors have won five out of their last six games and lead the Atlantic Division, but Indiana is playing arguably some of their best ball of the season and should be able to come away with a win in tomorrow’s match-up in Toronto.

These are the games which Indiana must win if they are to demonstrate they are a team on a mission for home court in the Eastern Conference. With Miami going 3-1 on their west coast road trip this past week, Indiana must keep the torrid pace of wins that both teams seem to be on this season. Indiana now leads the Central Division by 12.5 games, but lead the conference only by 1.5 games. If Indiana can continue to dispatch the teams they are supposed to beat, they will place themselves in excellent position to challenge Miami. After all, they’ve made no secret that is who they are looking out for.