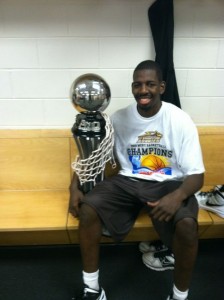 After a rookie season that showed off refined footwork and a consistent mid-range jumper, Orlando Magic power forward Andrew Nicholson has shown off sizable growth in his second season. Nicholson was one of the more polished players in the 2012 NBA Draft after staying four years at St. Bonaventure in New York; as a Bonnie, the 6’9” big averaged 17.1 points, 7.2 rebounds, on 57.5 percent from the field, showing Magic general manager Rob Hennigan he had the upside to be a first-round pick.

Throughout his rookie season, Nicholson saw his playing time and production fluctuate. While he had stretches of playing starter minutes and scoring in double figures, he also endured stretches where he couldn’t score, or was stuck on the bench and not playing at all. His final numbers were very pedestrian, finishing at 7.8 points and 3.4 rebounds per game.

The biggest knock on Nicholson his rookie season was his struggles on the defensive side of the ball. According to NBA.com, Nicholson had a defensive rating of 103.9 and a net rating of -6.9 on the season. His biggest struggles defensively came in the post, and coach Jacque Vaughn pointed to certain matchups as to why Nicholson didn’t always play last season.

Along with his defensive struggles, Nicholson was a below average rebounder in his rookie season. Among the big men to play for the Magic last year, only one, Josh McRoberts, finished with a lower rebounding rate while on the team. Nicholson’s rebounding rate, 11.7, ranked him seventh on the team. His biggest issue on the boards was putting a body on anyone on the opposing team.

Now, 33 games into his second season, Nicholson has really shown improvements in those two categories, along with a continually growing offensive game. Currently, Nicholson is sporting a 96.8 defensive rating and a -.7 net rating, and has shown he’s willing to be more physical on the defensive side of the ball. SynergySports has Nicholson ranked as the second best post defender this season, giving up a mere .52 points per possession. He still has room to grow and things to work on defensively, but the early improvements are good to see.

As for his rebounding this season, the St. Bonaventure product is averaging 4.7 rebounds per game, and has seen his rebounding rate jump from 11.7 to 13.4 thus far. Some of his improvement can be attributed to his increased physicality, but some is also due to him boxing out better. It’s been apparent from the start of the season that Nicholson has put in work and has focused on rebounding, and the statistics and his in-game performances show it.

Not to be lost in all of his improvements are his growing offensive game. Over the offseason he added a corner three to his arsenal, and he’s shown the ability to hit the shot at times this season. While his numbers (20 of 62), are less than stellar, his continued confidence and the proven ability to knock it down have opened up the game more for the big man.

One of the negatives of Nicholson adding the three-point shot is the fact he appears to fall in love with jumpers from time to time. This season, Nicholson has taken 66.8 percent of his shots from mid-range or beyond the arc, yet he only shoots 40.1 percent combined from those areas, compared to 57.6 percent in the painted area. From the start of last season, Nicholson has shown refined footwork in the post, and the ability to score in multiple ways down low.

So the question looms: why does Nicholson, the team’s biggest post scoring threat, not go down there more? When asked about his big man, coach Vaughn has said he wants him to continue shooting the ball from three. Nicholson is one of the more intriguing young players the team has, and could potentially be one of the best scoring threats on the team if he decides (or is allowed) to go down and show off his post scoring ability more.