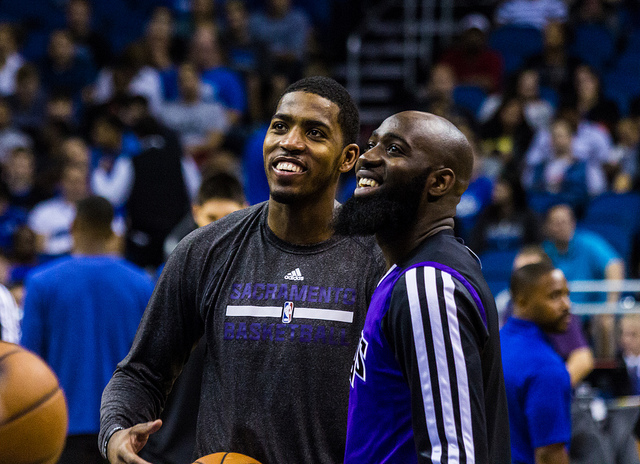 It is a rare and appreciated spectacle in modern professional sports to come across an athlete who seems to give more to the game than it can ever hope to give back.

In addition, to give one’s body, mind and soul to his team is a raw encapsulation of what it means to be a player in the NBA: a representative of a community that has fallen in love with a squad of basketball players. It is a sad and apparent truth that there is only a handful of these athletes left in pro sports.

Quincy Acy is one of them.

Acy is Kevin Garnett 2.0. Obviously, there’s an immense gap in skill between these two players, but Acy and Garnett play with the same level of mental fortitude and passion toward the game which results in an automatic spark anytime either is on the floor.

Acy is the unforgiving personality of basketball, the side of the game which causes a player like him to give every ounce of his expendable energy to his team. The similarities are there: the signature slapping down of excess shots by opposing teams, the screams of passion as Acy attacks the basket or his opponent, all of which have me personally enchanted every time he makes his way off the bench.

Unlike Garnett, Acy does not produce stellar and consistent numbers, but the rage with which he plays is something Sacramento should take into consideration on a nightly basis. This team plays as flat as any of the league’s bottom-dwellers, offering lazy, unimpressive attempts on almost every possession. The fire that Acy brings off the bench and into the game every time he enters the floor immediately manifests in his teammates – DeMarcus Cousins is one player who has consistently fed off of Acy’s wild energy.

From a consumer standpoint, Quincy Acy is my favorite Kings basketball player. In fact, he earned a spot in my heart from the second I watched him rip down shots after the clock expired, never shy to show his true emotion for the game. It is a beautiful thing to watch him play, not because of a special set of skill or talent, but because he reminds Kings fans what it means for an athlete to give himself completely to the fans, to the game and to the city.

Quincy Acy will be a restricted free agent in 2015, and I hope that the Kings will offer to lock him in for at least a couple of more years. Through the inevitable process of rebuilding for the Kings in years to come, Acy can and will provide a source of pure passion and rage that this team so desperately needs, and which fans so deeply enjoy.