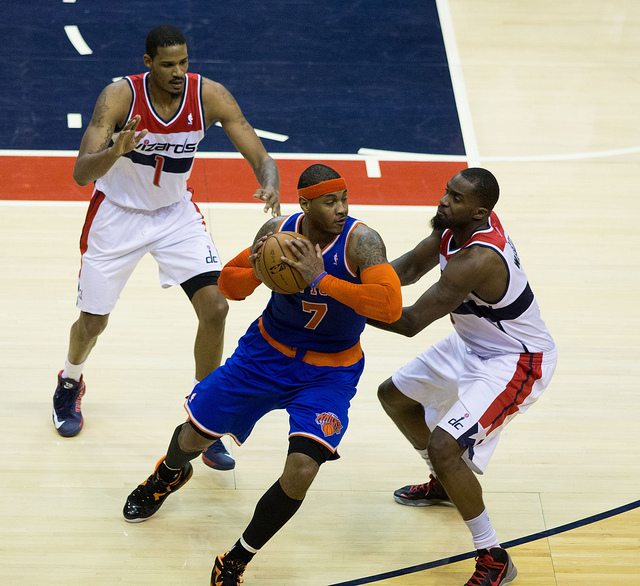 Considering the volatile nature of the franchise, predicting the future of the New York Knicks often feels like a frivolous thought experiment. Mercurial and meddling owner James Dolan cannot resist tampering with the roster, and his dubious transactions have marred the team’s image and function for the past decade or so. His thirst for relevance has led him to pursue aggressive strategies that mortgage future considerations for present-day success, yet these win-now moves have consistently proved ill-advised and counterproductive. Save for last year’s campaign when they made a token gesture toward contention, the Knicks have been mired in mediocrity since the early 2000s. Now, once-long-term concessions are beginning to pile up and intrude on the present, which, when combined with the team’s current dysfunction, is fomenting disaster.

The Knicks current 11-22 record puts them behind the Boston Celtics and Philadelphia 76ers in the standings, two franchises that went into the year expecting to struggle. As we near the halfway mark of the season, prospects for a miraculous turnaround in NYC are fading fast. This reality, while unfortunate, would normally be made tolerable by the NBA’s sweetest silver lining: a tantalizing lottery draft pick. Unfortunately, in their haste to contend, New York managed to ship out both of this year’s selections (as well as several others down the road) to assemble the disappointing roster we see today.

Compounding these woes is a complete lack of financial flexibility through 2015, a fate sealed in part by this summer’s befuddling Andrea Bargnani deal. This means that, in addition to a year’s deprivation of drafted talent, the Knicks will have little recourse to improve their team through free agency as well.

It should also be noted that this nightmare is unfolding under the burden of very high and very unrealistic expectations. Somehow, both Mr. Dolan and Knicks Nation remain conditioned to expect excellence, a standard that drastically outstrips the team’s capacity to deliver.

This year’s Knicks are the perfect storm — the culmination of years of mismanagement coming to a tumultuous head — and as a result, some serious questions are bubbling to the surface. Chief among them: an opt-out clause in Carmelo Anthony’s contract that permits him to test free agency at the end of the season.

Anthony’s decision represents a fork in the road. Whether he leaves New York or not, Carmelo will almost certainly terminate his deal to secure one last ultra-lucrative, long-term contract for his 30s. The Knicks must therefore assess his market value and the likelihood that he stays in New York, then decide whether they are a) willing to pay that cost long-term, b) willing to keep him now and risk his departure later, or c) willing to trade him to head off that eventuality.

If Anthony re-signed, it would more or less maintain the status quo. The Knicks would put another monster contract on the books (five years, $130M) and continue shelling out luxury tax dollars in a valiant struggle to improve. This is not the most exciting option, but it’s a safe one that would (in theory) secure them a foundation for success going forward. It is also the strategy the Knicks will likely pursue: if trading Anthony for a mish-mash of assets is inimical to James Dolan’s worldview, then the idea of his departure in free agency is unfathomable. Dolan’s front office will always operate under the assumption their players want to stay in “the Basketball Mecca” of New York City and never give up a big name for “peanuts.”

Given the Knicks flagging performance and Melo’s advancing age, though, Anthony fleeing for greener pastures is conceivably the most likely outcome of a free agency process. There are a number of franchises out there looking to retool; some of them flush with cash (Los Angeles Lakers), others with appealing rosters (Chicago Bulls), and their appeal might be too great for Carmelo. He could jump ship at a moment’s notice and leave the Knicks with nothing.

This would be New York’s worst nightmare, and is thus a possibility they should consider hedging against via trade. They would still lose their star, but it would be under their terms, and they would receive some concrete assets in exchange. Besides, it’s not like they have flourished with Anthony at the helm. In fact, no team has. Anthony has never made it past the conference finals, and as he toils through his 10th year, it may be time to re-evaluate his value as a franchise centerpiece.

Since his New York debut in 2011, Anthony has put up NBA All-Star numbers. He soaks up a ton of touches (his usage rate has never dipped below 31 percent in NY), he’s surprisingly efficient and has scored well in the clutch. But, being the face of the organization and taking the big shots is not necessarily synonymous with being a franchise player. To be a true, championship-caliber cornerstone, you must inspire your teammates to excel alongside you.

LeBron James achieves this feat: his team follows his lead on defense and pursues opponents with frantic energy. On the offensive end, his aggressive style of play demands the attention of multiple defenders and creates advantageous opportunities for role players.

Carmelo’s teams, on the other hand, struggle to put forth elite defensive effort. His inattentive help defense sets the tone for the unit on the floor, and it results in late rotations, poorly hedged screens and rampant miscommunication.

It’s a similar story on offense, where Carmelo’s proclivity for the mid-range face-up shot leads to stagnant ball movement. He rarely creates easy opportunities for his less-gifted teammates, so their efficiency suffers. This is why we see both fearsome scoring outbursts as well as erratic performances from the Knicks’ offense, especially in the postseason, where tighter spacing and increased opponent focus on denying the three have spelled doom for New York of late.

The case can be made that Anthony’s losing ways should be excused because he has never had the talent around him for a deep postseason run. This would be a valid argument, except that LeBron James’ Cleveland Cavaliers reached the NBA Finals in 2007 with Larry Hughes, Drew Gooden and Boobie Gibson playing heavy minutes. If Melo is going to be paid and treated like a franchise player, he must showcase a similar ability to turn water into wine and carry a mediocre roster to the brink of contention. To date, no Anthony team has ever truly seemed like a threat, or even really had a firm identity. For whatever reason, that lightning rod quality that superstars like LeBron, Tim Duncan, Kobe Bryant, Shaquille O’Neal, and Kevin Durant possess seems absent in Carmelo, and he’s running out of time to find it.

So for a reeling franchise desperately trying to pick up the pieces, do I recommend tethering to an aging star without a discernable winner’s pedigree? No. With no draft picks and no cap room, what the Knicks need above all else is flexibility, and re-signing Anthony would only serve to stiffen their rigor mortis.

The truth is a trade would be best for both parties. Anthony would get his payday this summer one way or another, and a change of scenery would offer him a chance at re-invention. In the right situation, he might even learn to embrace his destiny as an overqualified second man. Meanwhile, in one fell swoop New York would shift its perspective on the season from “panicked failure” to “Zen rebuild.” The Knicks are 12th in the East and playing uninspired ball, so it makes sense to punt on a failed campaign if it means brightening currently bleak future prospects. Better to give up on delusions of grandeur and receive tangible assets in exchange than wallow in your pride and risk walking away with nothing.

As much as it hurts to admit, the Anthony Era has gone sour. It’s FUBAR. And as in any other stumbling venture, there comes a time when sunk costs must be swallowed. For the New York Knicks, this is one of those times. Sometimes you have to give up to go forward. It’s for the best, New York. Please: be strong.