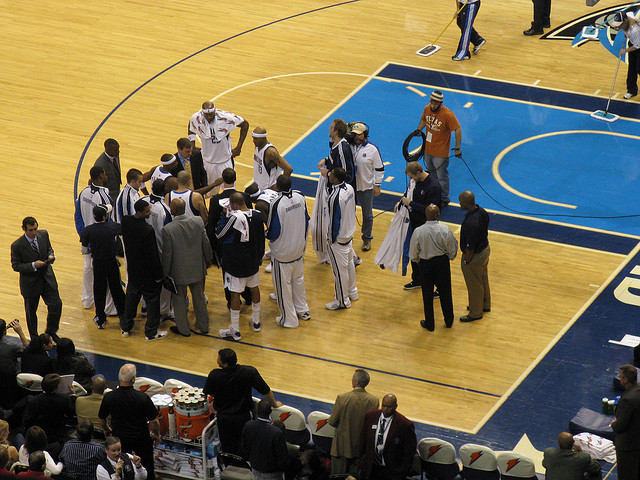 The Los Angeles Lakers suffered their eighth loss out of the last nine games to the Dallas Mavericks on Tuesday.

The Mavs played a good game, but the Lakers just beat themselves.

Despite having a roster that’s dwindled to nine active players, the purple and gold had a chance to win, but it was just one mistake or bad shot choice after another.

Pau Gasol has quickly become the most interesting person to watch, in terms of his stat line, since the trade rumors for him heated up recently. The Spaniard was out for a couple of games with an upper respiratory infection, but it seems like he’s recovered well.

Against the Mavs, Gasol was very aggressive in the paint, as evidenced by his 13 rebounds, four of which were offensive (an area that has not been his strongest this season). He also scored 15 points while shooting 35 percent. It’s been noticeable that Gasol has been ramping up his aggressiveness over the last few games, but it’s hard to know if he’s feeling better, or if he just feels some urgency with his job on the line.

While Gasol nabbed a double-double, he only shot 35 percent from the field. For a seven-foot player — or any player for that matter — this number needs to be higher. MUCH higher, and it only goes to show again how head coach Mike D’Antoni’s system is just not for this team. Or any team, really.

Another example of that was Chris Kaman being benched for yet another game. The big man was a DNP-CD, despite the fact that there are only nine guys on the roster that can even play. In fact, he has yet to play a game in 2014, and only six games total in December. During this time, he averaged 8.1 points and 6.6 rebounds in 18 minutes. It’s not fantastic, but it’s also enough to get some PT. Especially, when there are only eight other men who can play. His size and defensive presence — both things that are unmeasurable by current stats — would have been a welcome addition in this game to slow down the 17 fastbreak points the Mavericks scored.

Turnovers were another huge part of this loss. In all, the Lakers had 20, with Kendall Marshall alone being responsible for six of those. That said, Marshall was the main reason the Lakers were even in the game. The point guard led the Lake Show as their most accurate shooter, 70 percent, and scored 18 points.

Some notable injuries from the game were Nick Young and Shawn Marion. Young was only 1-for-7, which is odd for Swaggy P. Marion suffered a shoulder contusion after he fell hard in the second quarter.

17 – The Lakers turned the ball over 20 times, but the Mavericks also caused 17 steals, which is “the most in a victory since registering 19 against Washington on Feb. 10, 1994,” according to the NBA. Since Marshall is still finding his stride, this isn’t too hard to believe, but shows one thing: the Lakers need to be more careful with the ball.

26 – The Mavericks had 26 more points in the paint than the Lakers. What?! The Lakers have three active players who are listed as 7-0 (Gasol, Kaman, Robert Sacre), one 6-11 guy (Ryan Kelly) and a 6-10 center (Jordan Hill). The tallest person on the Mavericks is Dirk Nowitzki (7-0), followed by Samuel Dalembert (6-11). In situations like this, when the Lakers are winning in the size department, they should definitely be the victors in the paint.

The Lakers go on to play the Houston Rockets on the second of a back-to-back games. They need to pull off a win there, against Dwight Howard and James Harden, to buoy their spirits. This Mavericks loss wasn’t a terrible one in terms of the score, but losing the last eight of nine makes it hard to see the bright side. When a team isn’t seeing any kind of results, it gets discouraging.