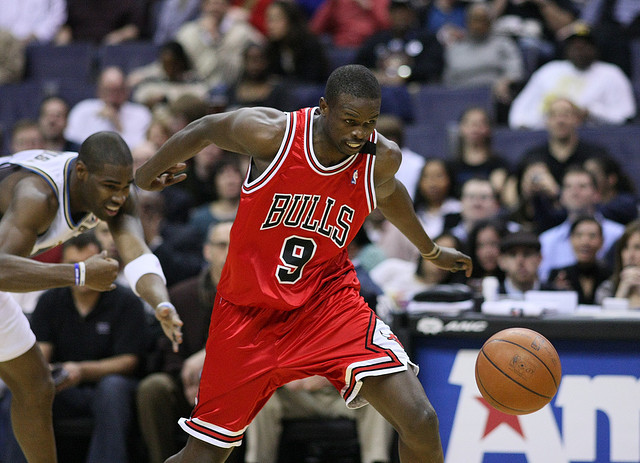 Sporting a record of 14-18 and in the sixth spot in a weak Eastern Conference, the Chicago Bulls aren’t exactly out of the playoff picture. Sure, they have a solid chance at making the playoffs, but even if they do get in, then what? At their worst, they’ll be bumped off in the first round, and at their best they’ll be pushed off the grid in the second. In 2011, they had the best record in the league (62-20), and they showed promise that they could win another championship. Sadly, that all fell apart when Derrick Rose went down.

Should they stay the course, in hopes that Rose will stay healthy and bring the team back to the top? Or make some big moves and reinvent themselves? It seems like they’ve already decided their course by trading Luol Deng to the Cleveland Cavaliers for Andrew Bynum and three draft picks.

Deng, an All-Star and solid all around player is a really tough loss for the Bulls. With Rose out, he was the main go-to guy on the team, putting up 19 points, 6.9 rebounds, and 3.7 assists per game. By dropping him, the team loses a reliable scorer and lock-down defender that’s a solid option to take big shots. He’s also one of the few players that can give superstars like LeBron James and Paul George some problems on the defensive end, a rare skill that definitely holds some weight. Giving up Deng is almost like giving up a piece of kryptonite used to slow down superstars. The Cavs really got a solid player that will put them one step further in the right direction.

“The moves today will put us in a better position to make the entire roster stronger for the future and to compete for a championship,” Bulls general manager Gar Forman told the Chicago Tribune.

Chicago waived Bynum on Tuesday, before the second half of his meaty $12.3 million contract could take hold. They’re looking towards the future, and are basically not investing in going all in for this season, which is smart, because no matter how you cut it they’re not going to get anywhere near the gold this year.

The gritty, blue collar play of Deng is definitely a big loss, but they could look onto someone else to fill his shoes. They didn’t even necessarily need to get anybody of his caliber because they already have a rising star in Jimmy Butler. Butler is an amazing defender with growing potential that can be the David to James’ Goliath.

Deng is turning 29 this year, and he does have some wear and tear on him. This season he’s been out of the lineup nine times already, most recently because of an Achilles injury. Butler definitely needs to improve his offensive game, but on defense he’s just fine. Not to mention, Butler’s only 24 years old. Deng will be truly missed, but now Butler has the opportunity to step up.

They’ve dropped Deng, so now should they drop Boozer too? Boozer is a solid player, but he’s not getting any younger. At 32 years of age, he’s slowing down. That catapult shot of his isn’t as effective as it used to be. He’s slumped a few points down on his scoring average, compared to when he became a Bull, contributing 14.7 points per game this season. He’s also gone down in other categories as well, including field goal percentage. Who can step up in his position? Enter Taj Gibson. Gibson is much more efficient on defense, and he’s improving on the offensive end, scoring 11.9 points per game this season, the highest average of his career. Of course, it can be argued that he’s more effective off the bench, sparking the second wind of the team by leading the second unit.

If anyone on the Bulls is to be traded, it should be Boozer. Keeping the aging Boozer will be very expensive for the 2014-15 season, as they would have to pay him $16.8 million, which is why he will likely be amnestied if a trade can’t be struck. The Bulls are going for a younger squad to possibly build around Rose, so letting go of Boozer would make sense for them.

When Rose comes back, he’s definitely coming back to a new Bulls team any way you look at it. He may not favor that, but the NBA isn’t going to wait for anybody. The bittersweet parting from Deng, and the potential cut of Boozer, will allow the Bulls to rejuvenate to do battle in the future. One of the essential steps to self improvement is self destruction. The Bulls are breaking the core of this team in hopes of constructing a group that’s younger, bigger, and better. Cheers to the future.