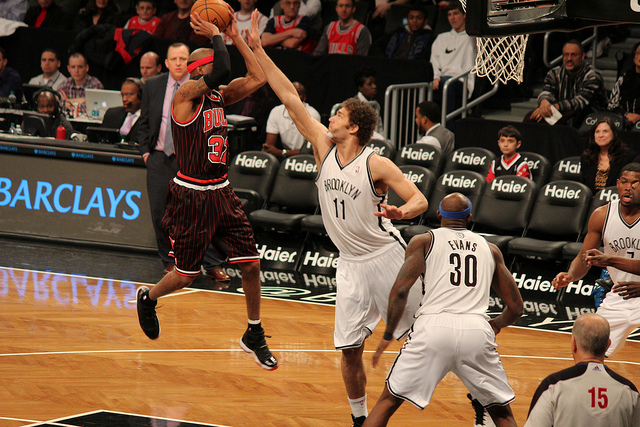 The Brooklyn Nets are a disappointment. Some say it’s because of the injuries, and some they’re just too old, but the real issue is that the Nets don’t have an identity. Before the season began many thought Brooklyn would be a championship contender, and if they’re going to turn their season around and make a push for the NBA Finals, it’s going to be up to coach Jason Kidd to define them. As hard as it might be for Kidd to admit, he’ll need to look back at his time as a Nets player, and learn from the teams that beat him.

First there’s the 2002 Los Angeles Lakers. Shaq and Kobe teamed up to sweep Kidd’s Nets in four games. Brook Lopez (and now that he’s hurt, Kevin Garnett and Andray Blatche) is no Shaquille O’Neal, and Joe Johnson is no Kobe Bryant. But between the two of them and Deron Williams, they have the potential to run Phil Jackson’s triangle offense better than any other team in the league. They are by nature a half-court offense, and with Kidd insisting on a more defensive style of play, and their age limiting their ability to dominate in a fast-break tempo, the triangle offense and the formula that swept Kidd in 2002 might be exactly what they need to get them over the hump.

Another possibility is to model themselves after the 2003 San Antonio Spurs, the team that beat Kidd’s Nets in six games. The Brooklyn Nets might not look like the low-key and hard-nosed Spurs team on first look, but if Kidd can demand respect from veterans like Garnett and Paul Pierce, and they can lead by example in the locker room, he might have a shot. It would require stars playing fewer minutes in favor of finding constant mismatches, but Kidd understands the game, and finding tricky matchups is what made him such a great floor general during his career.

If Joe Johnson can buckle down and put out a Stephen Jackson-esque performance spreading the floor, and Kirilenko can play the role of a Bruce Bowen-esque defensive stopper, it’ll be up to Kidd to manage a locker room full of huge personalities. If he can keep them patient and have them buy into his system like Gregg Popovich has in San Antonio, he could have a winning team on his hands.

The final option would be the New Jersey Nets’ longtime Eastern Conference rivals the Detroit Pistons. The 2004 Pistons defeated Kidd’s Nets in the Eastern Conference finals on their way to winning the NBA Championship. The Pistons as a team were greater than the sum of their parts. They weren’t afraid to play blue collar basketball until the very last second of the game. Players like Garnett and Kirilenko can set the example and begin to play the intimidating basketball they’re capable of, and Reggie Evans can play a Ben Wallace-type role then that frees up Deron Williams, Paul Pierce, and Joe Johnson to do their best Chauncey Billups, Rip Hamilton, Tayshaun Prince impressions. The talent is there; the only thing they need is a dedication to a style of play.

Coach Kidd needs to decide what kind of team he wants to coach, and he better decide fast because Indiana and Miami have made it clear they’re the teams to beat in the East. If Kidd wants to finally get the Nets a championship, he’s going to have to lead his team in a direction. That or he can demand a trade, and lead the Dallas Mavericks to a championship.