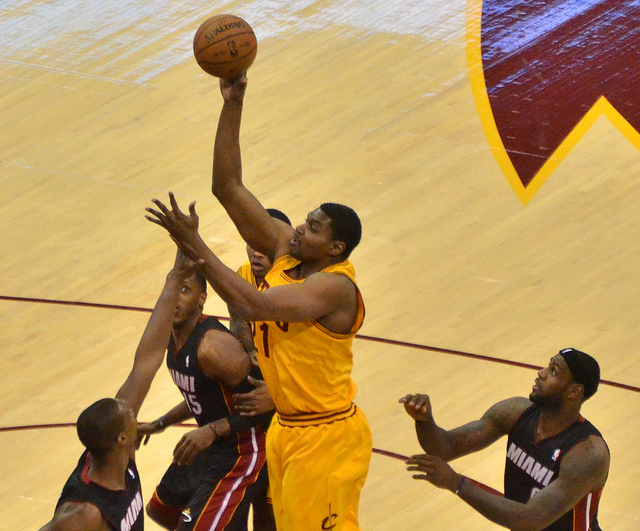 Lend me your ears. Andrew Bynum is an overrated, one-time All Star that does not lack basketball skills, but no team should take a chance on signing him in the foreseeable future.

The narrative that Bynum was arguably the best center in the league at some point has always been absurd. His best statistical regular season had averages of 18.7 PPG, 11.8 RPG, 1.9 BPG at 55.8 percent shooting. Pretty freaking good, but very similar numbers caused Lakers fans to turn on Dwight Howard last year while he played through a back injury. The one season he was asked to play a role higher than third banana was the same season in which he did not play in one game.

Team’s officials and media pundits were questioning his desire to play well before his recent release from the Chicago Bulls.

Supposedly, Phil Jackson is the only coach who has been able to rein in Bynum just enough to focus for the playoffs and play hard through injury. The Cleveland Cavaliers would not have signed Bynum if Mike Brown, who force-fed him the ball enough to get Bynum his sole All-Star appearance, didn’t vouch for him. That did not prevent Bynum from doing something so nefarious that the Cavaliers suspended him indefinitely. No one cares though. He’s still an unrestricted free agent that championship contenders are tempted to sign even though he can barely run up and down the court after having same surgery that revitalized Kobe Bryant’s left knee and career. 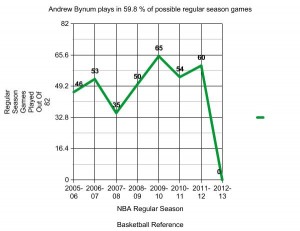 These figures are only going to skew further down.

PS: Bynum played this perfectly – he will have Clips + Heat courting him as soon as he gets waived. Clips are slightly more desperate.

This is the sentiment concerning Bynum around the league and it makes no sense. The Miami Heat already signed their under-30-year-old center with bad knees. Why in the world would Pat Riley fill two roster spots with guys who can’t get on the court? Beyond the blatantly obvious distraction that bringing Bynum back to Los Angeles would bring, why would Clippers management risk bringing in a walking lightning rod like Bynum in that locker room? Contenders need to fill spots with budget-friendly, hungry players who will play their role and be healthy enough to play when needed. That’s what the Heat did last season when they signed Chris Andersen, and they would certainly would not have won the ring without him.

I implore you all, friends, fans, countrymen, and general managers to leave Andrew Bynum alone. What potential he had has faded away. Don’t waste millions of dollars and locker room chemistry to prove what’s already known.