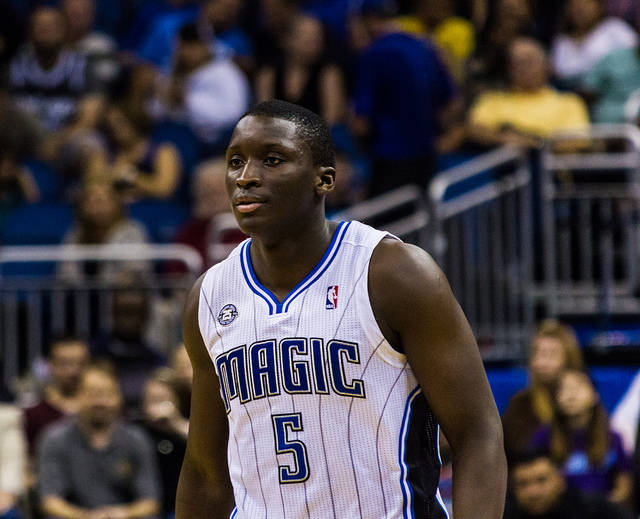 The Orlando Magic have struggled of late, dropping their last four games. Tonight, the team found itself a long way from home as they played the Portland Trail Blazers on the second of a five-game road trip to the West Coast. The Blazers came into the game with the fifth-best record in the league with Orlando at the 29 spot. It was clear before the game even started that this would be a tough test for the young Magic team. The key for Portland was not overlooking the Magic, and taking care of business at home against an inferior opponent.

The game tipped off with rookie guard Victor Oladipo replacing Nik Vucevic in the starting lineup due to a concussion. The Blazers jumped out to an early lead but Orlando fought back and looked determined to hang in the game thanks to a balanced scoring attack. Oladipo was given the task of guarding star point guard Damian Lillard and performed well. The 10th overall selection in the 2013 draft, C.J. McCollum, saw his first NBA action, checking into the game with about three minutes remaining in the first quarter.

Orlando built a 12-point lead as the half advanced by going on a 15-2 run. This came by way of the Magic simply out-hustling the Blazers on both ends of the floor, and Arron Afflalo lighting it up in the second quarter, capping off the half with 18 points. The Magic have struggled recently closing out quarters, however, and today was no different. That 12-point lead was cut to six thanks to Aldridge’s 21 points to lead all scorers at the half.

The third quarter started with a scary moment for Magic fans when Afflalo went down momentarily with what looked like an ankle injury. The shooting guard seemingly got his legs taken out from under him by a trailing Glen Davis. Fortunately, Afflalo was able to shake it off and finish the game without any problems.

Eventually, Orlando proceeded to go on an 8-0 run, propelling the team to a 61-53 lead with 7:39 to play in the quarter. The lead was again short-lived after the Blazers tied the game with a 9-0 run of their own, capped off by a three-pointer from Damian Lillard.

Magic fans who stayed up to watch the late game were victimized to yet another scary moment when Oladipo went down after what was initially called a flagrant foul against Mo Williams for grabbing Oladipo’s head on a fast break. Oladipo turned out to be OK and the flagrant status was later rescinded upon a review by the officials. It would be surprising if the league didn’t take a second look at the play, however, because it was quite obvious the defender went directly at the opponent’s head.

The game had all the makings of an instant classic going into the final period. Both teams had been battling hard for the first three quarters and neither side was willing to give up a loss. The style of play shifted into full gear with both teams playing in scrappy fashion.

As the fourth quarter progressed it became clear that Portland is the superior team from a talent standpoint. Thomas Robinson came off the bench and provided some notable moments on both ends of the floor, and Damian Lillard woke up and became a factor. The Blazers ran away with it at the end with a 12-0 run to seal the victory. The game was close for a majority of the time, but ended as a 110-94 blowout.

Even though the Blazers came out with the win, Oladipo delivered a block of the year candidate when he rejected Lillard’s attempt to hammer one home on the fast break.

Orlando delivered on defense against a tough opponent—at least they did for three quarters. Going into the game, the focus was to limit the Blazers and Lillard on three-pointers. Lillard came into the night leading the league in three-point field goals made, with teammate Wesley Matthews in fourth place, so this was a tall order for the Magic. Unfortunately, the efforts of the Magic defenders for three quarters were squandered as the Blazers caught fire from deep in the final period.

LaMarcus Aldridge was a force to be reckoned with. He finished the night with 36 points and nine rebounds. Basically, you could sum up the night with one phrase: “too much Aldridge.” Any time the Blazers needed a big shot they looked to Aldridge and he delivered in a big way.

This was a fun one to watch. The final score does not tell the tale of how hard both these teams fought, and the rugged defense both sides provided. Hard fouls were a commonality, and many plays ended with players on the floor and shaken up. Offensively, both teams went hard to the bucket, and the defenses were scrappy in their attempt to force tough shots. There were also a number of highlight reel blocks.

Both the second and third quarter saw Orlando jump to somewhat sizable leads after hefty runs. Both times Portland was allowed right back into the game as the periods came to a close. The Magic have made a recent trend of this and could not break the bad tonight. Although the Magic never really had the lead in the fourth, the Blazers still found all their luck in second half of the final period, when they completely ran away with the game.

Orlando extends its streak of consecutive games with a three-point basket to 527, dating back to March of 2007.