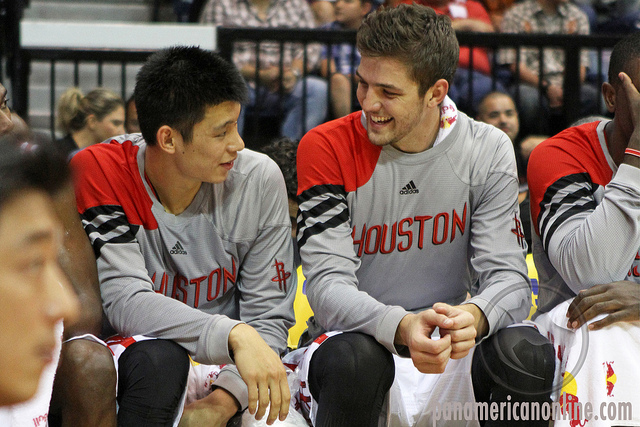 For one glorious half, the ragtag Los Angeles Lakers conquered the certifiably contending Houston Rockets.

Minutes into the third quarter, however, the dream ended as the Rockets roared to life and the Lakers reverted to bad habits, letting a five-point halftime lead slide into a 13-point deficit by the end of the period.

By the time the Lakers roused themselves for an attempt at a comeback in the fourth, James Harden and his fellow astronauts had soared out of reach, sustaining orbit through suppressing defense and quick transition buckets.

Though lethargic in the first half, particularly on the defensive end, Harden asserted himself as the most dominant player on the floor, controlling possessions and attacking the rim with a tenacity and consistency lacking in everyone else in the building.

The only Laker to approximate Harden’s performance was Nick Young, who picked up 25 points through acrobatic drives and off-balance jumpers. Once again coming off the bench, Young played the now reliable role of primary sparkplug, the only constant source of energy on the injury-depleted roster.

Without the All-Star starting backcourt of Kobe Bryant and Steve Nash, the Lakers are missing more than a regular scorer. They lack the on-court leadership necessary to steady the ship and keep morale high when opponents strike back.

Pau Gasol, the walking piece of trade bait, once fulfilled that duty, taking on a larger load in Kobe’s absence and elevating his game to superstar status, but the days of the Spaniard carrying the Lakers are long over.

Like the rest of his teammates, Gasol showed promise in the first half, juking Dwight Howard and ball-handling through the lane like a guard, getting the best of his former partner in the post on repeated possessions.

Despite the glimpses of brilliance and his end stat line of 21 and 12 with two blocks, Gasol never took over the game or opened it up for his teammates. Instead, he quietly contributed like a second or third banana on a squad seemingly all picked from the bottom of the bunch.

Jodie Meeks and Jordan Hill provided their usual contributions of erratic athleticism and non-stop hustle, respectively, while the whirlwind excitement of new addition Kendall Marshall was grounded by a horrific shooting performance (2-of-13), and almost as many turnovers (6) as assists (8).

Marshall’s inventive passing has been a boon for the Lakers over the last four games, but Houston forced him into tricky bounces and ill-advised lobs, making way for easy transition points that quickly buried the Lakers.

No Los Angeleno can be pleased with the sight of Harden throwing down a dominant dunk off a forced turnover, but at least it was The Bearded One that won the day, not the one-time Laker who left unceremoniously over the summer.

Despite his insistence on placing no significance on games against his former team, Howard clearly wanted to prove himself and make up for the loss handed out by the Lakers in their last meeting, way back in November.

His effect on the game was kept to a minimum, however, by the surprisingly suffocating defense of Robert Sacre. Once known only as a dancing punchline, Sacre has blossomed into a solid paint presence and the only consistent one-on-one defender in the backcourt.

Though his offensive skills still leave something to be desired, Sacre frustrated Howard more than any other Laker, forcing him into sloppy post-ups and swatting at the lazier attempts. He could prove himself an invaluable member of the rotation yet.

Of course, a Lakers game would not be complete without a surprising move from coach Mike D’Antoni, which came at the end of the third quarter when Chris Kaman entered the game.

Once a starter and most recently accruing a series of DNPs, Kaman doesn’t seem to fit into D’Antoni’s rotation anymore, leaving the veteran unsure of his position while rookie Ryan Kelly seemingly learns the game of basketball on the court.

Kaman had two decisive blocks and some solid offensive touches, but his real spotlight turn came in leading the doomed Hack-A-Dwight campaign at the close of the fourth quarter.

While Howard didn’t convert enough free throws to seal the game, the Lakers wasted their possessions just the same, resulting in a stop-and-go stalemate that grew uglier with each creeping minute.

In the end, the Rockets prevailed due to the Lakers’ inability to execute, particularly in the third quarter.
Los Angeles stayed close most of the way, but Harden made sure they never got closer than shouting distance.