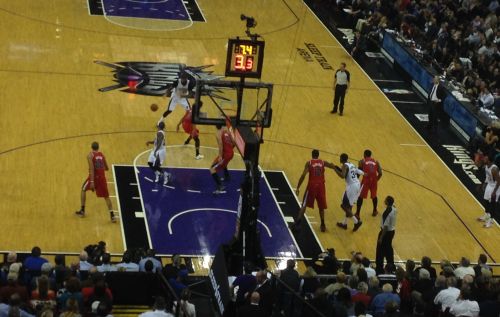 Inexplicably, Tuesday’s Sacramento Kings team was the same one that allowed 113 points to the Charlotte Bobcats just three nights ago.

It took two quarters, but against the Portland Trail Blazers, the NBA’s top-ranked offense, the Kings had a defensive epiphany. After a familiar first half that Sacramento would rather forget, it locked down Portland just long enough to secure a 123-119 win.

The Kings allowed 65 points in the first half, but came out a new team, holding the Trail Blazers to 13 in the third quarter. Both teams slipped defensively in the fourth, combining for 89 points, but ultimately Sacramento’s third-quarter defense helped it outpace its opponent.

Sacramento ramped up the defensive pressure – particularly in the second half – and players were active in the passing lanes, deflecting passes and forcing turnovers, from which the Kings culled 25 points.

“We just had more energy. We didn’t make any adjustments in (the locker room),” Isaiah Thomas said. “We knew they were the No. 1 scoring team in the NBA, so they’re going to score. That’s what they do. We can’t take away everything, so we just battled, they kept missing shots and we got out going.”

The key defensive performance in the third quarter was a team effort, something that’s eluded the Kings most of the season. Although Portland’s offense seemed characteristically potent, the Kings stuck to the gameplan for the most of the night and it paid off. They held the Trail Blazers to 43.3 percent shooting and frustrated LaMarcus Aldridge.

Aldridge was perhaps the top defensive priority of the night and Sacramento met the assignment head on. Rarely, if ever, did the Kings double-team the Trail Blazers’ sure-fire All-Star; they even went to so far as to give him deceptively open looks.

Sacramento hedged hard on Portland’s pick and rolls, sending a big man at the ball handler almost every time, which left Aldridge nearly open, if not for a rotating player along the baseline.

The Kings gave Aldridge problems throughout the night, but Damian Lillard picked up the slack near the end of the game, feasting on the Kings defense for 26 fourth-quarter points.

“Damian Lillard’s a great player. He’s an All-Star. Like Kobe Bryant said, vote for the Damian Lillards of the world,” Michael Malone said. “That show he put on in the fourth quarter was special.”

Aldridge is a virtual lock to suit up for the Western Conference come All-Star Weekend and, with Bryant and Malone’s endorsements, Lillard may be as well, which adds weight to DeMarcus Cousins’ hefty performance Tuesday.

Cousins has had more efficient outings this season and has certainly shot better from the free throw line, but few other games has he looked as dominant as he did Tuesday night.

The number of trips to the free throw line alone (he had 15 attempts) exemplifies Portland’s inability to guard Cousins. Throughout most of the night, he was matched up against Robin Lopez, typically a defensive stalwart, and Cousins eviscerated him. Despite Lopez’s reputation and ability, Cousins challenged him, continually attacking Lopez and the basket.

“In my eyes, it’s easy: he’s an All-Star,” Malone said of Cousins. “I don’t see one center in the entire NBA that does what DeMarcus Cousins does every night. … I think what he does every night against some of the better teams and better big men in the NBA warrants him to get a real, real honest look at being a first-time All-Star.”

Cousins wasn’t alone, though, as Rudy Gay (32 points, five rebounds and four assists) and Isaiah Thomas (22 points, seven rebounds and eight assists) registered eye-catching performances of their own. It was the strongest performance from the trio since its inception and Tuesday the group, which is familiar with posting similar stat lines, translated it into a win – a combination that’s been hard to come by for Sacramento.

“I said (to the team), ‘make a play for a teammate tonight.’” Malone said. “It’s not always about yourself, and I thought we looked to do that tonight.”

Earlier in the week, players called a team meeting, which they partially credited with the team-oriented play Tuesday.

“(Thomas and I) decided we need to have a players meeting, clear the air and ask (teammates) what they think as a group we should better and what individuals can do better on this team,” Cousins said. “It came out positive, cleared the air and I think it was a good thing.”