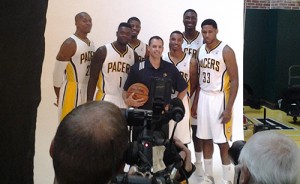 The Indiana Pacers were angry. Two nights earlier, they had blown a fourth-quarter lead and lost in Miami against their nemesis. Two nights before that, they’d dropped a game at home against Detroit, which is the kind of thing that happens during the NBA season as one game blends into the next. Not to this team, however. “Every night we’re playing for home-court advantage,” Indiana coach Frank Vogel told me as we walked down the hallway following his pregame media scrum, not long before his team took on the Houston Rockets in late December.I asked Vogel if he had any worries about how his team would bounce back from that Heat loss, a crushing three-point defeat that ended with Paul George howling about an uncalled foul from LeBron James on the game’s final play. George may have had a case, but he wasn’t getting that whistle against LeBron. Not in King James’ building, anyway. Get Miami in Bankers Life Fieldhouse in a Game 7 in front of an Indiana crowd, and who knows what might happen? Vogel looked at me like I was crazy. That play was the whole point of the Pacers’ season. Losing two in a row wasn’t just poor form. It was a refutation of everything they wanted to stand for as a team. “We really feel like every night we’re playing for a championship,” Vogel said. “A lot of teams can’t say that about their regular-season nights. There’s a lot of ‘Just Another Night’s’ in the NBA. But not with our team.”  SB Nation