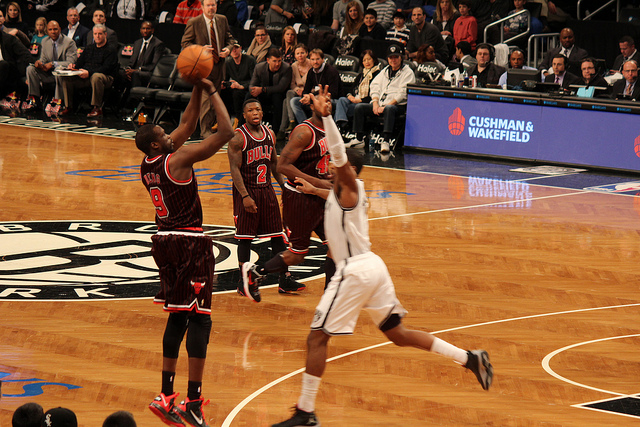 In the summer of 2011, a year after LeBron James left for the Miami Heat, the Cleveland Cavaliers were bestowed the No. 1 pick in the NBA Draft. That pick turned into Kyrie Irving, and it appeared, especially after watching Irving play, that the Cavs had cemented the beginnings of a team that would be competitive in the playoffs for years to come.

Fast forward to today. The Cavs have just given up three draft picks, albeit two of them second rounders, for Luol Deng, despite being 11 games under .500 and in 12th place in the deplorable Eastern Conference. The trade has a pungent smell of desperation attached to it, and the Cavs now look like a middling team with no clear vision going forward.

First, let’s examine the trade a little more closely. The Cavs had a need at small forward: the two who currently are getting the most playing time are Earl Clark and Alonzo Gee. Both of these guys post a sub-10 PER, which is bad. Really bad.

So, bringing in Deng addresses a huge need. He can score close to 20 PPG, defend effectively, he’s a good rebounder, and he currently has a PER of 17.4. Undoubtedly, Deng will make the Cavs better. It’s possible that the addition will even be enough to propel them into the playoffs this year.

Why is the Deng trade so troublesome, then? It’s as simple as timing. Given where the Cavs are in their development (the early stages, probably in need of two more long-term building blocks), and the stage in which Deng is in his career arc (likely nearing the end of his prime given his injury history and insanely high minutes load), this move looks shortsighted and serves a one-year purpose more than it does a three- or five-year purpose. The Cavs essentially built a roof over their house before the foundation was finished.

What hurts the Cavs most about the trade is not the draft picks they gave up, but instead of being bad and likely receiving a high lottery pick this year in one of the best drafts we’ve seen in a long time, they’ll be lucky to get a late lottery pick. They’re missing an opportunity to draft a potential second franchise cornerstone to play alongside Kyrie Irving. Obviously the draft guarantees nothing, but if the Cavs ever want to be a legitimate contender, they are going to have to build through the draft.

Having said all of this, the trade makes complete sense. The position of general manager for a sports franchise is not exactly synonymous with job security, and the Cavs have been bad since 2010, so what this trade likely does is save the job of Cleveland GM Chris Grant. If we look a little deeper, we can easily see why Grant’s job needed saving. Since picking Kyrie Irving, the Cavs have done a poor job of drafting players. I’m not just talking about the infamous Anthony Bennett, but Dion Waiters when Harrison Barnes and Andre Drummond were available, and Tristan Thompson when Klay Thompson, Jonas Valanciunas and Kawhi Leonard were available.

It’s these misses that have forced Chris Grant’s hand to make this desperation move. This trade likely won’t be historically significant, in fact it will probably be widely forgotten in 10 years, but it serves as a great lesson for NBA GMs: If you want to be successful in a small market, you must hit on your high lottery draft picks. If you don’t, you’ll likely be forced to sacrifice the long-term success of a franchise for your job security, which is exactly what transpired here.