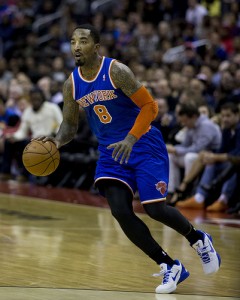 J.R. Smith said after the Miami game he’s unsure of his future with the franchise as the club can trade him starting Wednesday under a quirk in the collective bargaining agreement, but his three-year, $19 million pact is very likely untradeable. Smith’s latest series of gaffes include untying the shoelace of Shawn Marion, who has bad ankles, in Dallas and then faking an attempt at Greg Monroe’s laces the following game after the NBA and Woodson warned him to stop. He got fined $50,000 by the league, though the union is considering appealing. Woodson and Dolan could be playing with fire. Smith is represented by the CAA agency that represents free-agent-to-be Carmelo Anthony. According to a league source, it was CAA advisor William Wesley who influenced Dolan to originally sign Smith when he returned from a checkered stint in China in 2012, which then-general manager Glen Grunwald opposed. New York Post