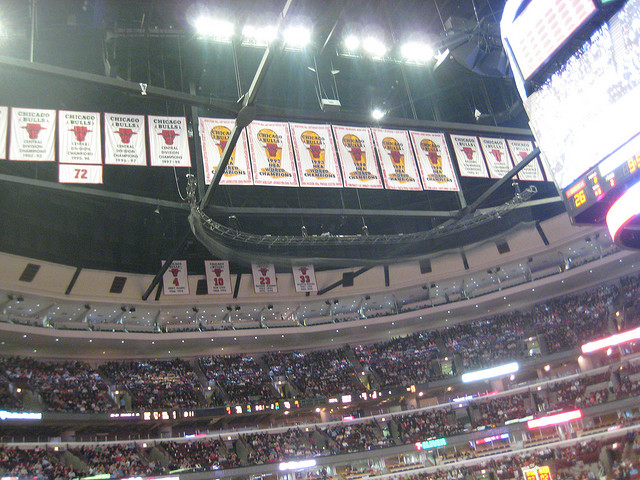 Chicago, known as the City of Big Shoulders has been forced to shoulder more than its fair share of bad sports trades over the years. The Cubs, famous for making ill-fated deals, shipped out Lou Brock ostensibly for Ernie Broglio. The Blackhawks, currently enjoying a franchise revival, traded away living legend Phil Esposito for Gilles Marotte, Pit Martin, and Jack Norris.

Some readers may recall the White Sox trading Wilson Alvarez, Danny Darwin, and Roberto Hernandez to the San Francisco Giants for six minor leaguers in 1997. The deal was made with the south-siders just 3 ½ games behind the Cleveland Indians for the American League Central Division lead. Regardless of whether the trade yielded positive dividends (two of the players the White Sox received were major contributors to a division-winning team in 2000), the trade was viewed as a fiasco at the time. Since then, Chicago sports fans are particularly sensitive to white-flag deals, even if there’s an outside chance it might be the prudent thing to do. There is no forest in Chicago, after all, just a bunch of trees.

Most recently, the NBA title hopes of the Windy City have been plowed under with yet another Derrick Rose season-ending surgery. In response, the Chicago Bulls have dipped their toes in the trading pool, shipping out 10-year veteran Luol Deng, surely an omen of things to come, at least in the minds of fearful Bulls fans. It’s a sure sign to fans that the sky must be falling…again.

Ever since the Michael Jordan era ended after the Chicago Bulls sixth championship in eight years following the 1997-98 season, the team has undergone a number of different iterations in the quest to regain their former dominance. Part of that ongoing quest has included a number of questionable trades.

In 2001, the Bulls traded Elton Brand to the Clippers for Tyson Chandler and Brian Skinner. Brand became a perennial All-Star in Los Angeles, in his seven years with the Clippers he averaged just under 20 points and 10 rebounds. Chandler, despite his current defensive prowess, never hit his stride with the Bulls, he struggled with injuries and faltering in productivity. Chandler was shipped out in 2006 to make room for the new, stop-gap solution, Ben Wallace.

In 2002, the Bulls traded Ron Artest, Brad Miller, Ron Mercer and Kevin Ollie to the Indiana Pacers for Jalen Rose, Travis Best, Norman Robertson and a second round pick. While the team was able to rid themselves of Artest’s eccentricities and penchant for destructive outbursts (see: certifiable craziness), the Bulls simply did not receive compensation in keeping with the talent they surrendered.

Further, on draft day in 2006, the Bulls traded LaMarcus Aldridge for Tyrus Thomas and Viktor Khryapa. Victor who? After just a season and a half Khryapa’s contract was bought out in the middle of the 2008 season due to lack of playing time. Meanwhile, Tyrus Thomas hasn’t played for the Bulls in some time now and Aldridge is putting up an MVP-caliber season in Portland. Yep…pretty much.

That brings us to this year, and the Deng trade. While moving Deng isn’t a negative sign in and of itself, Bulls fans still have a bitter taste over the last decade of trade debacles, coupled with the lingering essence of Rose’s injuries. The fans’ disdain resides in the fact that in obtaining and subsequently waiving Andrew Bynum, the Bulls appear to be waiving a white flag yet again.

The deal itself, thankfully, had very little to do with Bynum, outside of the immediate salary relief the Bulls will receive. Essentially, the deal is for three draft choices. The Bulls will receive Sacramento’s first-round pick via Cleveland, assuming it isn’t among the first 12 picks. The team will also receive two second-round picks, both coming from Portland in 2015 and 2016. The Bulls will also have the rights to swap fisrt-rounders with the Cavaliers in 2015, but only if Cleveland’s choice falls outside the lottery.

So, yes, it’s a lot for fans to digest—perhaps too much for the average fan, in fact. The conditional nature of the picks themselves casts an additional shadow of doubt upon an already dark silhouette.

The team would like their fan base to believe that trading Deng was not a sign of things to come, that this doesn’t have to be the beginning of an inevitable end. After all, Joakim Noah is still with the team, and so is Carlos Boozer. Well, Boozer remains with the team for now.

While Deng became a fan favorite after spending 10 years with the franchise that drafted him out of Duke University in 2004, it should be noted that the team never won a championship with him on the roster, and wasn;t likely to compete in 2012-13. Even though the team has won three straight games, this Bulls team, held together with spare parts and guile is three games under .500 at 15-18, and currently sits in sixth place in the Eastern Conference. It’s a good year to be a bad team out east, but middle of the road, even if it qualifies for the playoffs, just isn’t a title contender. Even since MJ set the unrealistic standard almost 20 years ago, the ring is the thing…the only thing.

A minority subset of fans are savvy enough to realize that change is the stark inevitability of sports and that a player of Deng’s age (28) wasn’t necessarily a fit with the direction of the team moving forward. Not that 28 is old, but we’re talking about sports here, basketball in particular. While he was averaging a career-best 19.0 points per game this season, Deng has done little to assert himself as anything more than a solid second or third-option type. His career averages of 16.1 points, 6.4 rebounds, and 2.5 assists suggest he’s a competent contributor, but far from a true difference maker.

Deng’s departure doesn’t even mean the sky will be falling in the short term. While some of Deng’s 37 minutes per game will go to 22 year old Tony Snell (currently averaging 18:47), the burden of Deng’s scoring should fall squarely upon the competent shoulders of Jimmy Butler and Mike Dunleavy. With that combination of talent, recreating or at least approximating Deng’s production shouldn’t prove terribly difficult.