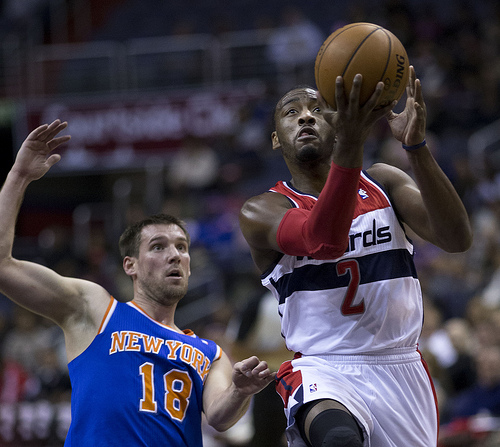 Seemingly never interested in doing things the orthodox way, the Washington Wizards have found solace in a recent run of form that has seen them win six of their last seven road games. Most interestingly, the Wizards home stand is a polar opposite, having lost six of the last seven games at the Verizon Center, the last win coming on December 28th against the Detroit Pistons.

So why have the Wizards have found success on the road and not in the comfort of their own surroundings? One observation could be that the Wiz is free from the distractions and pressure that is placed on a D.C. sports franchise to be successful. The nation’s capital is crying out for a team, any team to finally bring some kind of sporting consummation to the area. After the debacle that was the Washington Redskins regular season, the Wizards could very well be that team.

John Wall continues to show signs of an All-Star caliber player, averaging just a shade below 20 points game. The guard ranks third in the NBA in assists and fourth in steals. Wall, who still writes “Playoffs” on his sneakers to serve as motivation for this season has shown reason to silence the naysayers over his mega money contract awarded to him in the offseason.

I am really enjoying seeing Trevor Booker being utilized in the starting five allowing Nene coming off the bench. The injury prone Nene, who has missed seven games so far this season has seen his playing time reduced which can only be a good thing as the season progresses and bones grind to dust. The move also bolsters the Wizards bench points stats which started the season in a lackluster fashion.

Jan “Airwolf” Vesely has also had a recent spike in form. The Czech forward has averaged 8.7 points, 6.3 rebounds and 2.3 blocks in his last three games. A particular highlight I enjoyed witnessing was Vesely’s dunk against the Charlotte Bobcats in which he took off near the free throw line and slammed the ball home. Vesely also encapsulated a season high 12 points, when he caught a mid-air pass from Garret Temple and dunked against the New Orleans which led John Wall to jump out of his seat and curse.

It is also worth noting that the Wizards last six away victories have been against teams that are below .500 and so should realistically be able to grind out performances away from home. However, these are the type of games that the Wizards have historically had difficulty coming away with a tick in the win column.

Tonight, the Wizards face their toughest away game of the season so far; the Indiana Pacers who have a stellar 28-7 record and more impressively, an 18-1 home stand. Whilst most will heavily favor the Pacers, the Wizards will surely be hyped for continuing their fine run of road trip form and adding a memento to the mantle just like Predator does when he conquers a species.