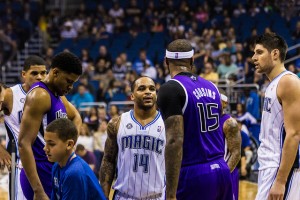 The Orlando Magic continued their five game road trip in Sacramento against the Kings on Friday night. It was the second of two meetings between the foes, the first of which the Kings won 105-100 in Orlando. This time around, the Kings won more convincingly, taking down the shorthanded Magic 103-83.

After a solid first quarter, which saw them grab a six point lead, the Magic struggled for much of the second. They struggled to find consistent offense, shooting a woeful 4-17 in the quarter, compared to 11-19 for the Kings. They also struggled with the Kings size, losing the first half rebounding battle 21-27.

The second half was much of the same for Orlando. They struggled shooting the ball and couldn’t get a real rhythm going on either end of the ball. A bright spot for the Magic was the fact they took a gut punch and countered some, cutting the lead down to nine. However, their inability to string together consecutive solid offensive possessions hurt them in the long run.

The Kings, who have struggled defensively this season, stifled the Magic throughout the game. Their ability to get stops opened up more for their defense, which led to five players finishing in double figures. DeMarcus Cousins led the way from the start, finishing with game highs in points (24) and rebounds (14). Rudy Gay chipped in 22, while Jason Thompson got going early en-route to 14 points on the night. Derrick Williams and Jimmer Fredette finished with 14 and 11 respectively off the bench.

For the Magic, only two players who played more than ten minutes shot over 50 percent on the night. Tobias Harris and Maurice Harkless were the only Magic men to finish at or above 50 percent. Harris led the team with 16 points, while Harkless continued his stout play on the road trip, finishing with 10. Arron Afflalo struggled to find his shot, but was still able to pour in 15. Victor Oladipo chipped in 13, while Glen Davis finished with 12 points and 12 rebounds.

Seemingly from the start, the Magic were flat on both sides of the ball. They didn’t bring energy and the Kings were able to pounce on them early and often. While the team is missing center Nikola Vucevic quite a bit, they need to find something to do to get themselves going. Vucevic has missed time multiple times this season, and each time the Magic have struggled on both ends.

Another direct effect of missing Vucevic is struggles rebounding the ball. Vucevic is hands down the teams best rebounder, and hits the boards with the best of them in the league. Tonight, without Vucevic who’s home with a concussion, were out rebounded 54-33. While Glen Davis had some success, grabbing a team high 12 rebounds, including five on the offensive glass, no one else had over seven on the night. Vucevic’s ability to rebound on both ends, especially offensively, helps the Magic’s flow on both offense and defense. They’re going up against a Denver team next that has guys who are high energy and crash the boards on the regular, so they could be in for another long night Saturday.

Afflalo, who has been the teams best player, has seemingly come up lame in each game for the last week. He turned his ankle earlier in the year, which caused him to miss a game, and he continued to hurt the same ankle. After the loss, John Denton of OrlandoMagic.com tweeted that Afflalo had X-Rays after the game that came up negative. He added that Afflalo said he did have a strained ligament in the foot that would most likely keep him out of Saturday nights game in Denver. If Afflalo misses extended time, it could be a huge blow to the already struggling Magic.

The Kings outscored the Magic 48-24 in the paint.

“We had a little stretch I think in the third where we got a little juice, got going in the end, recharged. It’s tough. You’ve got to fight that mental battle when you don’t see the ball go in and continue to play defense and continue to do the right things every play.”

On the losing streak…

This is really tough especially for a guy like myself. I focus before every game to win and to go out there and do whatever I can for my team to win. It’s frustrating and we can’t close out these games. It’s tough and at the same time we have to stay positive. We have another game tomorrow, so we have to have short-term memory but we still have to play tomorrow’s game and grow from this game.”