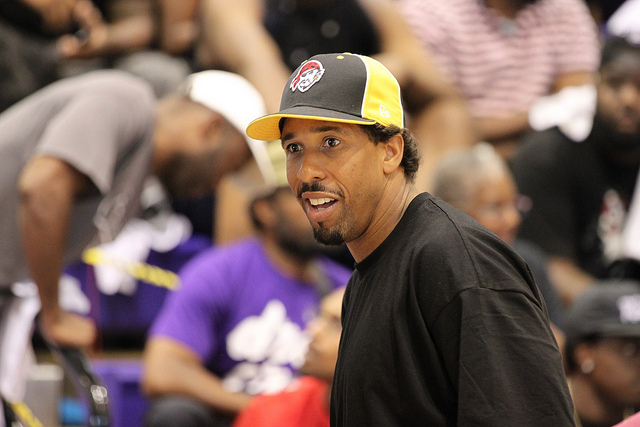 With one of the loudest DNP-CDs (Did Not Play – Coach’s Decision) of the season and with the benching that followed, Andre Miller suddenly became the most expendable Denver Nuggets player. Since falling out of favor with rookie head coach Brian Shaw, the Nuggets have been playing much better basketball and many believe it’s a matter of “when” and not “if” Dre is about to change uniforms.

Miller is a unique kind of player. To paraphrase Jalen Rose, he probably couldn’t jump over a piece of paper… and he can’t shoot. Still, Miller has a basketball IQ through the roof, is one of the best lob passers ever, remains one of the best dimers in the game and is an above average floor general who sees the whole court and can make instantaneous and cerebral decisions.

He can easily be an asset for a team trying to add a piece for contention. Conversely, he really doesn’t make sense as an addition to a bottom-dwelling team nor is he the kind of player you give priority to on the depth chart if you already have two good PGs or one great one.

Here are four teams that, based on those criteria, should be calling the Nuggets front office in the coming days.

New York Knicks
This would be simply fantastic for many reasons, some of which even have something to do with the basketball that would ensue.

But let’s start with how this trade would reunite four-fifths of the Denver Nuggets starting lineup from 2006 (Miller, J.R. Smith, Carmelo Anthony, Kenyon Martin, [Marcus Camby]) and look at that! All they needed to do was re-sign Camby for no discernibly good reason other than the possibility of completing this unlikely reunion – not to mention that this very same Nuggets core was heavily involved in a well-documented “brawl” in Madison Square Garden that very same year. None of the current Knicks were on that ’06 Knicks team and who says the universe doesn’t have a sense of humor?

But, let’s get to the basketball. The Knicks, if you haven’t noticed, could really use some stability at point guard. Miller and Anthony worked exceptionally well when they played together. Melo was leading the NBA, averaging over 30 ppg with Miller running the show before he was traded to the Philadelphia 76ers for Allen Iverson.

Miller and Melo’s games complement each other’s well; Miller can handle the ball and make passes at just the right time to put Carmelo in the best possible scoring position, including combining Miller’s trademark lob-passes and Melo’s uncanny ability to finish at the rim.

Also, if you hadn’t heard, Dre doesn’t miss games unless Brian Shaw or the NBA decide that Dre should. That kind of consistency is something the Knicks desperately need after the roller-coaster that has been the return of Raymond Felton and the inconsistency that has been, well, I guess everybody else who suits up for the Knicks. The Knicks could possibly offer Andre Miller a starting position something that few other playoff teams could do.

With Andre Miller you know what you are getting and you are always getting it. He can run the offense seamlessly. The only problem with this trade scenario is that the Knicks don’t have much to offer unless they want to overpay.

The Nuggets (and the Toronto Raptors) already have all the Knicks draft picks and there isn’t much on the roster that Denver is likely to covet. Does Tim Hardaway Jr. land Andre Miller? Maybe, and maybe the Knicks should find a way to overpay just a little because Miller could very well be the glue that turns the Knicks into a very scary team.

Golden State Warriors
The Warriors are an intriguing destination and one that’s likely to anger Nuggets fans almost as much as some guy suggesting they send yet another player to the Knicks. This would be another reunion for Miller, albeit a less ridiculous one, with a teammate from last year’s Nuggets, and fellow Dre, one Andre Iguodala.

Miller would more obviously remain a bench player for the Warriors, but he would be a good one. He can provide stability to that second unit and allow coach Mark Jackson to give more rest to superstar Stephen Curry so that his legs don’t fall completely off his body by the time the team gets to the playoffs. Depending on how Miller played, he could very well finish for them. And that’s much more important for a team with high aspirations.

Trading for Andre Miller would also be a big acquisition for a team that could use a boost in the “being-calm-and-not-doing-crazy-things-in-the-final-minutes-to-unnecessarily-let-the-other-guys-back-in-the-game” department.

Washington Wizards
Andre Miller might fit into a Wizards jersey quite nicely.  With John Wall and Bradley Beal in the mix, Miller again would likely have to come off the bench, but (again, again) could be a calming, veteran presence on a young team looking to make a playoff run.  It’s another situation where depending on how things play out, Miller could be on the court at the end of games (maybe in some three-guard sets) and allow Wall to occasionally play a card from his off-the-ball deck.

Having a point guard as athletic as Wall allows you to have one as unathletic as Miller without hurting the team much. Oh! (and I swear this isn’t on purpose), but of course Miller would be reunited with another old alley-oop mate in Nene. Maybe at this point Andre Miller has thrown a lob pass to everyone!

With the Eastern Conference wide open this year (to put it kindly), it makes a lot of sense for the Wizards to go for it. Okay, trading for Miller isn’t earth-shattering, and it doesn’t qualify as a blockbuster, but in the right situation, he absolutely can be a difference-maker. He can be the straw that stirs the drink, if the ingredients are right; in Washington they just might be.

Sacramento Kings
Sacramento doesn’t fit some of the criteria I listed above as they aren’t contenders looking to add a piece for the stretch-run, but they could offer Miller significant minutes and the chance to get the absolute best out of DeMarcus Cousins. Miller could be the best thing to happen to Boogie Cousins and Cousins wouldn’t be such a bad thing to happen to Miller either.

Sacramento has also been rumored to have offered Marcus Thornton or Jimmer Fredette for Miller, though those rumors seem to have died down for the moment.

But I can’t shake that I have a hard time imagining a world in which Cousins and Miller don’t complement each other perfectly. Miller can stabilize some of the… interesting decision-making… while simultaneously taking advantage of the remarkable offensive ability Cousins displays. Miller recognizes the hot hand quickly and will continue to feed the beast as long as the beast keeps getting buckets.

Miller’s acquisition would also help the much-maligned Rudy Gay by taking some of the playmaking duties out of Gay’s hands. Gay is still an exceptional athlete who can finish with contact at the rim, get to the foul line and even occasionally get hot, but he shouldn’t be anywhere close to running the offense, or even being the go-to guy.

With Miller running the show, Gay is likely to only get the ball in situations that are best for him where he can use his athleticism to get to the rim off-the-ball, where Miller will almost certainly find him.

Have I mentioned yet that Andre is a good mentor for young players and that the Kings have a bunch of young players who could use some mentoring? Yeah, okay, just double checking.

I know I said that Miller doesn’t really make sense for a bottom-dwelling team, but the Kings are an exception. They are filled with young talent in Cousins, Isaiah Thomas, Ben McLemore and Derrick Williams. That’s a lot of potential firepower that you want riding shotgun, but someone has to drive the car. If the Kings could find a way to keep most of that young talent and hand the keys to this crazy ride to Andre Miller, the Kings would instantly become a must-watch on league pass and maybe even a team to watch out for moving into 2015.

Don’t let his first career benching and the fact that he hasn’t played in a few weeks fool you, Andre Miller is still very much a valuable basketball player and could have a stealthy but important impact on how the rest of the 2013-14 season plays out.