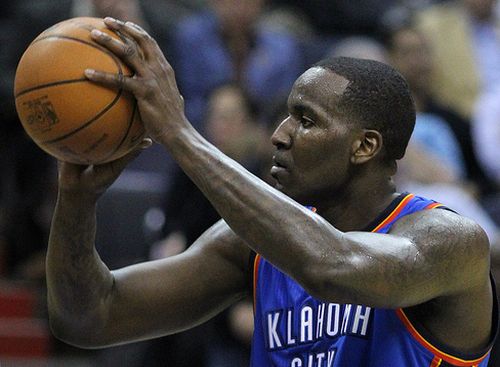 Sunday, the Sacramento Kings put on a one-man show. Aside from Isaiah Thomas, the rest of the team failed to make much of an impression.

Thomas scored a career-high 38 points, but his offensive explosion wasn’t enough to prevent a loss to the Oklahoma City Thunder, which walked away with a 108-93 victory.

Sacramento’s diminutive point guard came out of the gates scorching hot, knocking down contested threes, drawing fouls and setting up teammates. With Russell Westbrook out and Oklahoma City’s attention focused on others, Thomas got nearly anything he wanted, weaving through the Thunder defense with relative ease.

He was the exception, though, and the Thunder frustrated the rest of the Kings defensively throughout the night. Aggressive double-teams on Rudy Gay and DeMarcus Cousins limited Sacramento’s top two scorers and led to turnovers that Oklahoma City capitalized upon.

On multiple occasions, a second defender sneaked up from behind to apply pressure on Gay or Cousins and stripped the ball in the process, turning loose the Thunder’s dangerous transition offense. Lack of ball security and transition defense proved a poisonous cocktail for Sacramento; its 21 turnovers led to 34 Oklahoma City points.

“The one thing we always try to preach is showing a resiliency to making mistakes. If you turn the ball over, try to limit them to less than a point per turnover,” Michael Malone said. “54 of their 108 points came off of turnovers and offensive rebounds. That’s got nothing to do with gameplan and coverages, we just have to do a better job of valuing the basketball.”

The defensive pressure clearly agitated Gay, who only had six points on seven shots. In the fourth quarter his frustration boiled over and he received two technical fouls in quick succession for arguing with a referee.

The Thunder, on the other hand, got strong performances throughout its rotation Sunday. Kevin Durant had a somewhat typical, but nonetheless outstanding game. He registered 30 points on just 15 field goal attempts and even got teammates involved, tallying nine assists. Serge Ibaka benefitted greatly from Durant’s generosity; the Thunder big man was active off the ball, knocking down catch and shoot opportunities and cutting to the basket.

Oklahoma City’s offense was clicking so much that Malone resorted to putting Kendrick Perkins at the foul line to disrupt the Thunder’s rhythm, he said.

“Sometimes when you can’t get a stop, you put a guy on the foul line. I’d rather have him shoot it than (Durant) shoot it,” Malone said.

While the wide margin created by the Thunder upset the Kings, it did afford them the opportunity to play Carl Landry for the first time this season. Landry had been out of action since October as he recovered from a torn hip flexor, but with the game out of hand, Malone saw a chance to get his forward some run.

Landry only played nine minutes, but looked comfortable and registered six points and nine rebounds in his limited action. Malone said looks forward to getting more production from Landry off of the bench as he becomes more healthy.

“One of the beautiful things about Carl is that he can be a go-to player. DeMarcus, with that first group, is our go-to post guy, Rudy can post a little bit, but now Carl Landry is a guy we’re going to go to in the post and put in pick and rolls,” Malone said. “He can score in different ways – he’s good facing the basket as well as back to the basket – so he’ll be a guy we go to.”

The Kings’ next chance to work Landry into the offense will come Tuesday, when Sacramento concludes its recent road trip with a game against the New Orleans Pelicans.