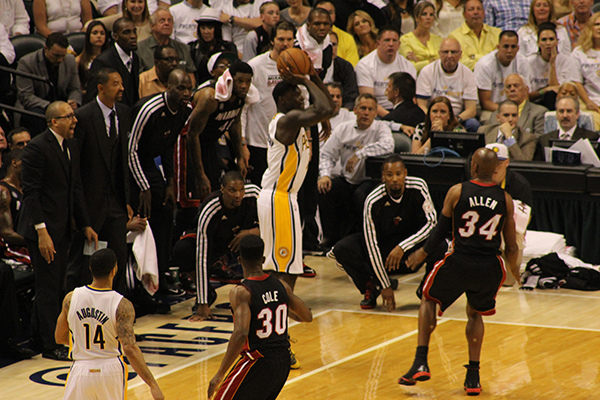 In truth, the only player who can make the difference in a playoff series against the defending champions is… Lance Stephenson.

Many scouts believed that Stephenson was just one more prodigiously talented yet tragically immature young player who would never amount to much in the NBA. And for his first two seasons in Indiana, this was indeed the case. Last year, Stephenson finally showed signs of growing up and harnessing his skills.

As of this writing, he’s Indiana’s second-leading scorer (15.6 ppg), most efficient shooter (50.2 percent) and assist-maker (5.1). On the debit side, his 2.6 turnovers per game ties Stephenson with PG for the team lead in this dubious category.

Yet Stephenson’s game goes beyond his numbers.

He’s easily the best overall athlete in the squad, and just as easily the most explosive. It’s Stephenson who can create something out of nothing – sudden bursts to the hoop for unexpected scores, impossible off-balance shots that make the nets dance, magical now-you-see-it-now-you-don’t assist passes, coming from nowhere to make a steal, rising to dunk in heavy traffic. Yes, he still takes too many questionable shots and makes poor decisions with the ball, but his errors of commission and omission are rapidly decreasing. More than any other teammate, Stephenson plays on the edge of greatness and when he’s on-balance he can change any play, any game, any series.

That’s why Lance Stephenson is Indiana’s X-factor and the biggest threat to a three-peat by the Heat. HoopsHype