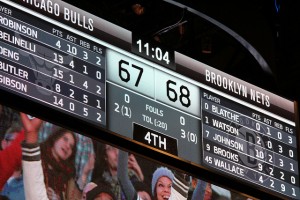 The Chicago Bulls announced today that the team has acquired forward Tornike “Toko” Shengelia (TOR-Neek Shen-ge-liya) from the Brooklyn Nets in exchange for guard Marquis Teague.

Currently in his second NBA season, Shengelia was drafted by the Philadelphia 76ers in the second round (54th overall) in the 2012 NBA Draft (his draft rights were traded by the 76ers to the Brooklyn Nets in exchange for cash considerations). In 36 career games, the Tbilisi, Georgia native holds career averages of 1.5 ppg and 1.0 rpg in 6.4 mpg.

Teague, in his second year out of the University of Kentucky, was drafted by the Bulls in the first round (29th overall) in the 2012 NBA Draft. In 68 regular season contests, he holds career averages of 2.1 ppg and 1.3 apg in 9.3 mpg. NBA.Com