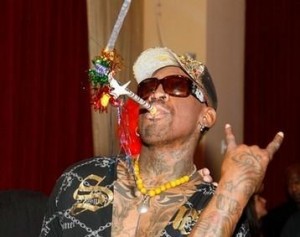 Dennis Rodman has checked into an undisclosed alcohol rehabilitation center to treat his long-time struggle with alcoholism, his agent says.

Darren Prince declined on Saturday to say which facility will treat Rodman and how long he will be there. Rodman recently returned to the United States from his latest trip to North Korea.

He later apologized for comments he made in North Korea about a detained American missionary, saying he had been drinking and was under pressure as he organized an exhibition game there. He also sang ”Happy Birthday” to North Korean leader Kim Jong Un at the start of the friendly game.

”What was potentially a historic and monumental event turned into a nightmare for everyone concerned,” Prince said. ”Dennis Rodman came back from North Korea in pretty rough shape emotionally. The pressure that was put on him to be a combination ‘super human’ political figure and ‘fixer’ got the better of him.

”He is embarrassed, saddened and remorseful for the anger and hurt his words have caused.” Associated Press