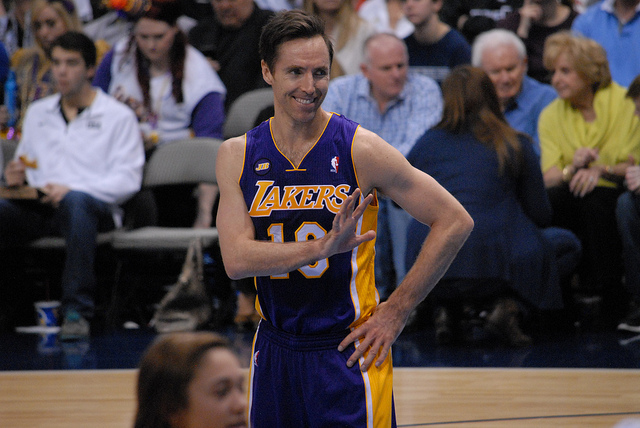 Is there any reason the Los Angeles Lakers shouldn’t trade Steve Nash? The answer has become, unequivocally, no.

Initially, when the Lakers signed Nash, people were generally excited. The organization had just suffered the blow of the vetoed Chris Paul trade, which probably could have set the team up for playoff success for the next several years. But that didn’t happen.

When the team was able to bring their longtime rival and eight-time All-Star Steve Nash to the team, fans were happy to get some sort of bone thrown their way in the wake of Phil Jackson’s departure and Mike Brown’s tumultuous tenure as head coach. He also filled the need for both a point guard and someone who could keep Kobe Bryant in check, the way Derek Fisher had for so many years.

It was hard not to get caught up in the excitement, but there were a few who looked at the signing for what it really was: an ill-advised business move.

Based solely on the numbers, Nash had been in steady decline for the previous three years with the Phoenix Suns both in points per game and in the amount of games played each season. However, where the Lakers get some credit is that he had two of his career-high years in his average assists.

That said, there was no reason to think that an already unhealthy, older player was going to be a good large, multi-year contract.

Nash will make $9.3 million this year, and $9.7 million next season, if the Lakers can’t unload him somehow.

There was hope earlier this season when Nash originally injured himself that he would be forced into medical retirement, but that was quelled when Nash told the press he was working very hard to make a comeback. When he comes back though, he’ll still be a defensive liability. Coach Mike D’Antoni has shown that as soon as he has even a semi-point guard back in the mix, he will run them into the ground (Kobe Bryant and Jordan Farmar are great examples).

So, what can be done with Steve Nash?

Obviously, forced medical retirement would be the best option, but since that likely won’t happen, a trade would be the way to go. Unfortunately, Nash is set to make a lot of money that, frankly, he isn’t worth. This means the Lakers would have to give up something else valuable to unload the vet. This is where things could get interesting.

Nick Young is having a near-career year, averaging 16.4 points per game. The Lakers have him on contract this year for $1.1 million, and he has a player option next year for $1.2 million. Now, that could be an attractive piece to trade to another team if he agrees to stay there the following year. However, while Young is from L.A., there’s a good chance he could make more money if he chooses to become a free agent.

Robert Sacre is shooting 49 percent, scoring 4.5 points and getting 3.3 rebounds per game, and he’s on contract for the next two seasons at under $1 million each year. The last year is also a team option, so if he doesn’t pan out, it was a cheap mistake (in the NBA world, anyway).

Other than that, the Lakers have a ton of expiring contracts.

So, who might want to get in on a Nash-ty trade? Well, there’s no specific team that seems to need what he’s got right now, which is nothing because he’s still injured. Whatever team he goes to should just think of him in the same role that Fisher has in OKC: he’s a peacekeeper who can give them a few solid minutes. Not great minutes, but solid minutes.

What would the Lakers want in return? A point guard to back up Kendall Marshall, for starters, and other than that they really just need a few young guys who are quick and will play defense—emphasis on “play defense.”

The Lakers don’t have a bad team. All of these guys can play good basketball. They just lack a solid game plan. Nash has been conditioned with D’Antoni’s game plan, which we can all agree is not working out that well. The record speaks to that. They have six players who average double-digit points (everyone on the team averages 13 to 31 minutes when they play, and in total the team would score 154.3 points if everyone were to hit their shooting average. In comparison, the Los Angeles Clippers would score 135 if everyone hit their average and the Miami Heat would only score 125.5 points).

So, back to Nash. The Lakers just have to come up with some kind of trade package that includes Nash, Young, or Sacre, and maybe some draft picks if they want to rid themselves of this contract.