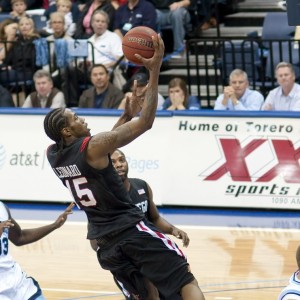 The hits just keep on coming for the San Antonio Spurs — small forward Kawhi Leonard left Wednesday’s nationally televised matchup with the Oklahoma City Thunder after suffering what the team called “a non-displaced fracture of his right fourth metacarpal,” a bone below the ring finger on his shooting hand, making him the third Spurs starter to go down in the last three weeks.

Leonard sustained the injury while trying to separate from Thunder rookie Steven Adams with just under four minutes remaining in the second quarter. Be warned: It’s kind of gross.

Leonard checked out immediately thereafter, finishing with three points, one rebound, one assist and one steal in 15 minutes of play.

The Spurs didn’t release a timeline for Leonard’s expected recovery. Yahoo Sports NBA columnist Adrian Wojnarowski reports that the team remains hopeful that a Thursday morning visit to a hand specialist will reveal that the third-year forward will not need surgery to repair the fracture; even if no surgery is needed, though, healing the fracture will likely require rest and immobilization, which could keep Leonard off the floor for several weeks. Yahoo Sports