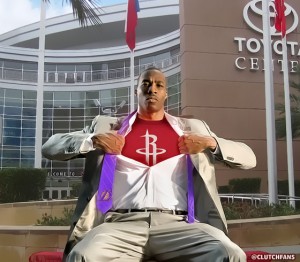 When Dwight Howard signed the dotted line with the Houston Rockets, a few things happened. First, we all learned that Texas has no state income tax. Next, Daryl Morey cemented his reputation as an elite NBA general manager. And then, things got awkward for Omer Asik.

After acquiring Howard, there was just no way Houston could keep Asik. The two centers would not be able to play together due to their lack of ability to space the floor, despite the Rockets claiming they could. Asik deserved to play big minutes, but they couldn’t come at the expense of Dwight’s minutes because he’s just too good. So the solution was pretty straightforward: trade Omer.

Here we are, about halfway through the season, and still no Asik trade. Not for lack of trying, though. Morey declared a self-imposed December 18 deadline for Asik to be traded. That day came and went with no trade. Apparently, Asik didn’t have as much value as Morey had hoped—this will happen when you don’t let a guy eclipse the 20 minutes per game mark. The lack of minutes has Asik upset as well. He has demanded a trade and has not played since December 2nd.

There is now less than a month before the actual trade deadline, and a decision on what to do with Asik is imminent. It is time Daryl Morey gets creative, and by that I mean he should explore trade options for Dwight Howard.

Before you call me crazy, please note the word “explore.” Also, the only way the Rockets should trade Dwight is if they are sure Asik would buy back in to getting his starting role back. Assuming this is the case, let’s look at the two players and why trading Dwight and keeping Asik could be worthwhile.

First, let’s examine the defensive side of the ball, considering that is the principal role of a center in the NBA. Omer Asik is unquestionably the better defender. This is not to slight Howard’s defense, but just a ringing endorsement of Asik’s. Opponents only shoot 43.2 percent at the rim while Asik is defending versus 47.4 percent when Howard is defending. While both players are good at defending the pick-and-roll, Asik is likely better because he is so adept at showing and recovering. We don’t always see Howard show effectively, often leading to open jumpers. Howard, while still a tremendous defender, just isn’t the powerhouse he was in Orlando.

It’s the offensive side of the ball that separates Howard. He is worlds better than Asik. The Rockets are able to feed Dwight in the post and expect him to score or get doubled. This is not an option with Asik, whose role on offense is equivalent to an extra in Robert Redford’s new film “All is Lost.” Dwight is better in every way on the offensive side of the ball, and that is why he usurped Asik’s starting role.

Yet, Asik has a seemingly low trade value at this point. This is likely due in large part to the fact that he hasn’t played in a month and a half. On the other hand, it stands to reason that Howard would have incredible value on the trade market for some teams. Because of this, the value that Howard would return in a trade could be much greater than the chasm in on-court value between him and Asik, giving a Howard trade the potential to be a net positive for the Rockets.

Here are a couple possible trades just to show that it’s not too big of a reach to find the right deal:

*In order for this trade to work, Houston, and possibly the Boston Celtics, would have to send first round picks to the Philadelphia 76ers.

*Here’s another in which picks would likely need to be sent to the Toronto Raptors; the Atlanta Hawks and Houston Rockets both have a lot of picks.

Whether either of these trades would be agreed upon is not the point as much as it is to show that if the Rockets do get creative and explore trading Howard, there are realistic trade scenarios. Again, the Rockets don’t need to trade Howard, but it seems foolish not to explore the idea.