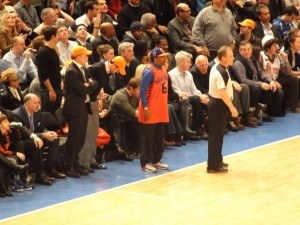 No other basketball team except the Los Angeles Lakers celebrates the presence of big-name fans at its games as aggressively and as unabashedly as the New York Knicks do. In a city where fame is its own reward, and proximity to fame is nearly as exciting as the thing itself, celebrities in the stands help promote the exceptionalist notion that the city is special, the Knicks are special, the Garden is special and Spike Lee is a better kind of fan than Jack Nicholson.

Celebrities, of course, are different from you and me, and the Garden has developed a well-oiled system of cultivating and cosseting them.

“If you’re an A-level person and we know the fans are going to go bananas when your picture goes up on the scoreboard, then there’s a value having you there,” said Barry Watkins, the Madison Square Garden company’s executive vice president for communications and administration. “We think it’s a big part of the brand. Win or lose, it’s one of the reasons people come to the games.” (In fact, at 15-26, the Knicks have been doing a lot of losing this season.)

How these celebrities end up at the games; how they get assigned their particular seats; how they are treated when they arrive at the arena; what they do in return — all these apparently simple issues are in fact immensely complicated, reflecting the Garden’s policy of never missing an opportunity and never leaving anything to chance.

The Garden, it turns out, has an ad-hoc celebrity-handling team whose members determine who in fact counts as a celebrity and to what degree; pursue relationships with those people (or their representatives); and deflect demands from lower-level personalities who wish they were celebrities but in fact are not. On game nights, the team also has to contend with such tricky questions as, is Katie Holmes more important than Liam Neeson? And, when you have two rappers with the same last name — Mike D. from the Beastie Boys and Chuck D. from Public Enemy — should you seat them near each other?

At the recent Knicks-Heat game, the answers could be found, as is so often the case, on an Excel spreadsheet. Entitled “VIP Locations” and organized according to some mysterious proprietary formula, it mapped out exactly who would sit where — John McEnroe in the third row, the boxer Miguel Cotto in the fifth row, a gaggle of New York Rangers in the 17th row — and it reflected various unspoken rules of V.I.P. placement. New York Times