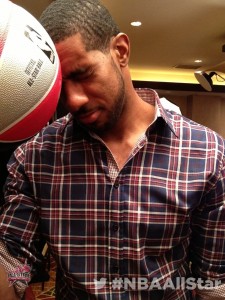 “I stand by my belief that he’s [LaMarcus Aldridge] the best power forward in the game,” Stotts said. “I think he showed it again tonight. It’s not the first time he’s shown that. The starters are voted by the fans, but I think LaMarcus has the respect of the coaches and the players and the general managers in the league.

“We feel like L.A. should have been a starter,” said Damian Lillard, who finished with 11 points (on 5-for-10 shooting) and 3 assists.

“I don’t know why he doesn’t start the All-Star Game,” added Batum, who tallied 6 points (on 1-for-5 shooting), 7 rebounds and 10 assists. “With this guy, I don’t know what he needs to do to prove to everybody that he’s the best. I don’t judge anybody [else] but he proved it again tonight.”

“Can’t really do much about [him being left out],” said Wesley Matthews, who finished with 24 points (on 8-for-15 shooting) and four assists. “His play speaks for itself. Our record speaks on behalf of his play. That’s it.”

But that wasn’t it. A reporter prodded Matthews: Didn’t those 44 points against the Nuggets look an awful like a statement game from LaMarcus Aldridge?

“I think his statement is going to come on Saturday,” Matthews said.

Wouldn’t you know it? The Blazers will host Love’s Timberwolves on Saturday. Blazers Edge