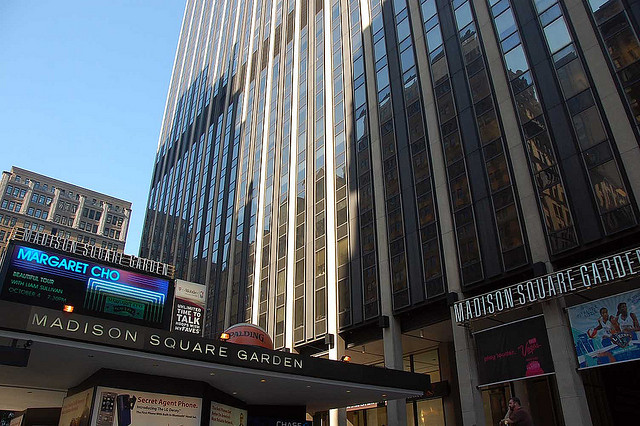 As the seconds ticked away, winding down the first half of the New York Knicks’ matchup with the Charlotte Bobcats in Madison Square Garden, Carmelo Anthony grabbed an inbounds pass, took three dribbles and launched a one-foot heave from half court. On what is usually looked at as a prayer shot, the outcome was all but a given with the way Anthony had shot the ball in the first half. As the ball swished through the hoop, the Garden erupted in a way that I haven’t heard in at least a decade. He was on! That amazing shot capped a 37-point first half for Melo, but the energy in the air said he wasn’t done.

There are a lot of great scorers who’ve come into the league. There are a lot of great scorers who are in the game today. But to be considered an elite scorer, you have to be special, and Anthony proved just how special he is. He showed how quickly he could put points on the board in the Olympics when he lit up Nigeria for 37 points in 15 minutes, but this was with a different purpose. When he finally came out of the game with seven minutes left in the fourth quarter, he had tallied 62 points in a performance that will be remembered as one of the greatest and proudest moments in the mecca of basketball.

This was more than just a record-breaking scoring outburst. It was a statement, a testament to the pride that comes with wearing that New York Knicks uniform. Melo now has the highest point total scored by a player this season, beating scoring juggernaut Kevin Durant’s previous high of 54. Melo’s 62 points also represent a new team record previously held by the immortal Bernard King, one of Carmelo’s idols. To me, the most important record Melo surpassed was Kobe Bryant’s arena record of 61 that Bean dropped on the Knicks in 2009. So when Melo scored his 59th and 60th points, coach Mike Woodson could have taken him out and he and Bernard would be tied for the team record. That would have been acceptable and honorable to Bernard. But that wasn’t enough and everyone knew it, even King. If anyone is going to own the record for most points in MSG it was going to be a Knick, and it was going to be Melo. So as he drove to the lane and rose up for his oh-so-sweet patented pull-up jumper, the building was ready. His teammates were ready, and as the ball banked in MSG was electrified. Pride raced through the veins of every Knicks fan from Wall Street to Rochester, at a time when morale has been at an all-time low, and once again Carmelo Anthony was lifting us up.

So far, this season had been one to forget. That performance was a jolt of life. After beginning the new year on a little win streak, the Knicks had lost four straight and were heading back in the wrong direction. As they’ve asked him to do so many times, Melo saved the day and may have saved the season. He said his focus was locked in. There was no laughing from the normally jovial Anthony before this game. Not only was it a must-win, there was more that needed to be said in this game. He needed to show his home crowd why MSG is the best place to play, and not just for an opposing player looking to have the game of his career. This is our house, and this was a statement that the season isn’t over yet. If the Knicks are going to go down, they’re going down firing, led by No. 7.

The bright side of this win is that it’s a game closer to the final playoff spot in the East. As Knicks fans we feel that if we make it into the playoffs, there is always hope with Melo on the roster. He’s been one of the lone bright spots on a team under intense scrutiny. Criticized as a one-dimensional player, it seems ignored that he’s averaging nine rebounds a game and three assists. Regardless, if his one dimension is scoring, that’s all good when he can score as potently as he does. As the Garden crowd chanted “Melo, Melo, Melo,” I joined in (to the delight of my girlfriend) from my couch. If the Knicks have any hope of pulling off any miracles this season it’s going to take epic performances like this and more Melo miracles. That game makes you believe.