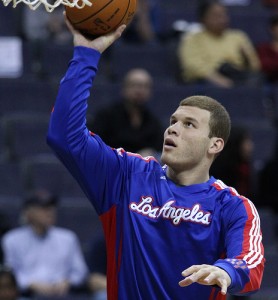 With both teams in the second game of back-to-back contests, On Saturday night the Los Angeles Clippers were matched up against the Atlantic Division leading Toronto Raptors trying to snap a four-game losing streak on the Raptors home court. In the last four contests held at Air Canada Centre, the Raptors have held the Clippers to 40 percent from the floor, with the Clippers only scoring 84 points in each of those losses. Starting 4-8 at home, since the Raptors have gone 7-1 most notably after the Rudy gay trade. The Raptors last home loss was in December against the Los Angeles Lakers.

Still without Chris Paul, Darren Collison led the Clippers at the point guard position for the 11th straight game as the Raptors started off hot, scoring 17 points to the Clippers seven with only seven minutes left in the first quarter. Both Blake Griffin and J.J. Redick are in the top ten in first quarter points scored per game, and although this game Redick got off to a cold start and left the game early due to back spasms, Griffin continued his MVP candidate play scoring 10 points to bring the Clippers back and narrow the gap to 37 to 36 with the Raptors still in control at the end of the first quarter. Raptors guard Terrence Ross and Clippers swingman Jamal Crawford were tied in scoring with 15 points each.

Coming off his best two games of the season with 40 points in wins against the Mavericks and 34 against Philadelphia, DeMar DeRozan sustained an ankle injury earlier in the game, leaving the bulk of scoring duty to Terrence Ross who answered the call with 51 points on the night, going 16-for-29 from he field, including 10-for-17 from three and 9-for-10 from the free-throw line, tying the franchise record for points set by Vince Carter on Feb. 27, 2000. Jamal Crawford would battle back for the Clippers, scoring 18 points in 11 minutes of action deep into the second quarter, with the Clippers outscoring the Raptors by 7 points to end the half 71 to 63, despite only collecting four fast break points.

The Clippers are 19-0 on the season when they hit nine or more three pointers, and against the Raptors they poured in 12, with five coming from Jamal Crawford. Crawford commented on the performance with, “When you’re in a shootout like that and it comes down to a few stops and you get them, and pull out the win its always fun.” Indeed the Clippers were involved in a shootout, with the teams exchanging leads 12 times in the game, until the Clippers finally closed the Raptors out with a 13-2 run to take a 117-108, fueled by the Clippers ability to get quality defensive stops in the final minutes of the fourth quarter. Jamal Crawford scored a season-high 37 points, followed by Blake Griffin with 30 points and five rebounds.

Doc Rivers commented on the Clippers spotty defense for the majority of the night with, “When you can absorb a 50, and win a game it says a lot about your team. It was one of those nights when there was going to be no defense played, we just played a bit more than them.”

The Clippers next battles will take place on Monday versus the Milwaukee Bucks, Wednesday vs. the Washington Wizards and Thursday vs. Golden State.