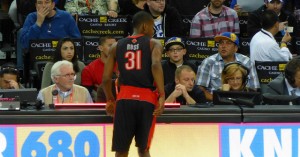 Terrence Ross scored a career-high 51 points in Toronto’s 126-118 home loss to the Los Angeles Clippers on Saturday, tying the Raptors’ franchise record for points in a game.

The second-year guard matched the 51 points scored by Vince Carter in a Feb. 27, 2000, game against the Suns. Ross missed a free throw in the game’s closing seconds that would have given him the record.

Ross nearly doubled his previous career-high of 26 points, set on Jan. 2, 2013. Saturday marked just the fifth time that Ross, a 2012 lottery pick, has topped 20 points during his career, and he entered the game averaging 9.3 points per game.