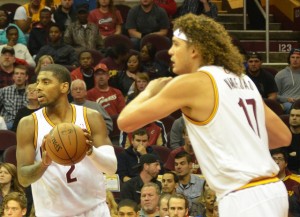 I asked him [Kyrie Irving] why Augustin gives him so many problems.

“Problems?” Irving responded, as if disagreeing with the assessment. So I reminded him that Augustin had 27 Wednesday after scoring 18 in the previous meeting. Irving blamed the defense.

That doesn’t account for all the times Augustin simply beat Kyrie Irving off the dribble, but he’s not alone.

Of that list, the only player who is supposed to be in Irving’s class is Lillard, yet all of them are reaching or exceeding their averages fairly easily against the Cavs. All-Stars don’t allow the D.J. Augustins of the NBA to beat them so soundly, nor do they allow their teams to lose by 44 to the Sacramento Kings.

Irving has to take ownership of all this. When he truly does, inferior guards will stop having big nights against him.