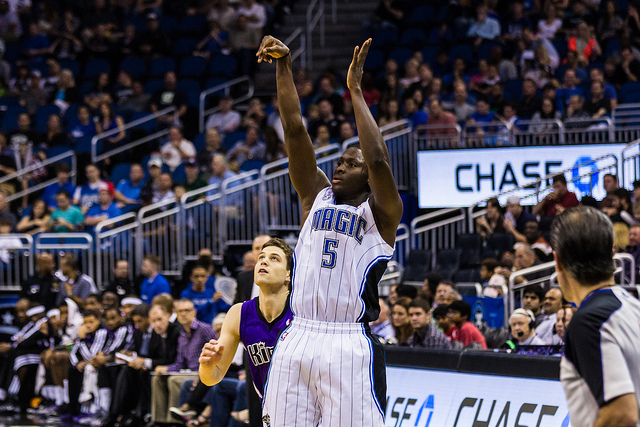 Fourth quarter, November 3, Orlando Magic up 80 to 61 against the Brooklyn Nets. Nets guard Deron Williams stood in a three-point stance at the wing awaiting a screen from forward Kevin Garnett. Locked in on defense, with the same focus and intensity that made him one of Indiana University’s least favorite players to practice against, Victor Oladipo jumped the ill-placed screen by Garnett to steal the ball from Williams, tapping it into the backcourt. Although a steal leading to a breakaway layup or dunk would usually incite raucous cheer, the Orlando crowd remained composed as if it were the calm before the storm. Victor would take one dribble from close to half court and rise with no regard for the laws of gravity or basic human genetics to hammer down a dazzling and equally vicious 360 two-handed dunk, much to the crowd’s pleasure judging from the sellout-sized boisterous applause in the halfway vacant Amway Center arena. It was a defining moment for the rook, graduating from league obscurity to the new kid on the block, a feat that Victor had to claim on his own … again.

When Joan Olapido was pregnant with her son Victor and twin sister Victoria, the Nigerian immigrant who had only been living in the U.S. with her husband Chris for close to six years dreamed that NBA Hall of Fame center and Nigerian hero Hakeem Olajuwon autographed a basketball and gave it to her. Now that Victor Olapido is “slamming MCs like Scottie Pippen” under the bright lights of the NBA, Mrs. Olapido is anything but surprised.

Victor Olapido was born to be the center of attention. At his graduation from prekindergarten, when the class sang a song, Victor had the only solo. As the only son in a family with three sisters, it’s these talents and the knack for being special at anything he undergoes that created two sets of goals from Victor’s parents with only one clear-cut road chosen. Victor was destined to crossover defenders and lead teams to a higher level ever since the first grade when he was left without a spot on a team due to a registration problem. Once a spot was opened up, he led his squad to the championship. Ever since, he’s had no registration problems or difficulty finding a spot, but the Victor Olapido we see in the league almost never was.

In Nigerian culture, respecting elders is of utmost importance. For a son destined to do great things, being a disciplined man takes high precedence on the totem pole. Chris Oladipo was born in Sierra Leone, and before he obtained a doctorate in behavioral sciences from the University of Maryland or worked multiple jobs to support his wife and four children, he experienced the struggle and subsequent defeat of apartheid in South Africa. Such an experience would harden any man, creating a sense of pride for surviving and a thirst to establish and pass along a pattern for success, keeping the lineage strong. For these reasons, Dr. Oladipo did not view basketball as a way of life, but more so a hobby.

For a father attempting to steer his son away from the weights that slowed his rise to success, Chris was more concerned with preparing Victor for manhood, instilling in him the skills he deemed necessary to become a success in America. Chris made the attempt to demonstrate that with every intention of being private, often at the expense of being viewed as detached from his family, and as Victor’s reputation and stardom grew on the court, naturally attention was driven towards his family, most notably his father. It was widely speculated that he didn’t attend any of Victor’s high school games, and the media attempted to position Chris to be an absentee father, reminiscent of so many dads who abandoned their sons only to return when the NBA dollars began to roll out. Not the case in the Oladipos’ story. Although Chris only viewed a handful of Victor’s high school games in person, and none of his college games at Indiana, a proud dad is still a proud dad. It was Chris’ cultural pride that made greater headlines.

Chris walked over a mile each way to school as a child, had multiple jobs at a young age and eventually left Sierra Leone early to further his education. When he returned with his doctorate, he married Joan and they decided to move to the U.S. and start a family. Both Chris and Joan knew the value of hard work, and made every effort to instill the same amount of discipline and responsibility in their children by leading from example and the designation of chores for the kids. In a household focused primarily on academics, Chris didn’t glorify Victor’s talent for the hardwood, even if he was a standout prospect drawing the attention from NCAA recruiters and professional scouts. In fact during the most pivotal time in Victor’s recruiting process, Chris was intent on sending his son to China for a full summer to study martial arts and improve self-discipline. He was completely unaware to the fact that Victor was already being immersed in lessons on manhood, discipline, hard work and community on the hardwood. At Indiana University, Victor would go on to be named The Sporting News Men’s College Basketball Player of the Year and the National Co-Defensive Player of the Year, and it’s that strong on-court play that would make him the second overall draft pick to the Orlando Magic.

While the more familiar and sadly popular story might’ve been how Chris Oladipo was the estranged father who was never there for Victor, on draft night America witnessed a father and son exchange an embrace tighter than the silent bond they’ve shared throughout Victor’s childhood. It was a dual exchange of respect, admiration and cultural transition, because although Victor is a first generation American in the Oladipo family, their ties back to South Africa and the consequential ethos necessary to build a man remain intact. Perhaps he would’ve preferred a more traditional or academic method, however in his eyes Victor is now a man. With an absence of dirt, public attention was swayed from Chris’ absence and hoops disinterest to a misdirected but fortunate drive placed in such a humble, educated and gifted young man.

Fourth quarter, November 3, Orlando Magic up 82 to 61 against the Brooklyn Nets. After the dunk from Oladipo, Nets call a time out. An ideal break from the game affording Victor the opportunity to further electrify the crowd, emphatically beating his chest and screaming “let’s go!” He was the center of attention again, and it was the last time he’d ever emerge from obscurity.