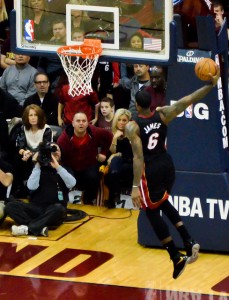 There’s more to a dunk than just two points. At its finest, a dunk is a representation of creativity, excitement, and ferociousness all in one action. It can set a crowd on fire in mere seconds. Well, ladies and gentlemen, it’s almost that time of the season again for the NBA Dunk Contest. On February 15, five NBA throw-down artists will compete in a test of aerial creativity.

Now, the dunk contest doesn’t always get it right. At its best, it really has the potential to be the premier event of NBA All-Star Weekend, but we’ve all seen it stink something fierce before. We yearn for the days when amazing dunkers like Dominique Wilkins, Vince Carter, Michael Jordan, and Kobe Bryant were a given to enter the competition. Now it’s considered lucky to get a couple, or even one, elite dunker to participate.

We all have our list of dunkers that we want to enter the dunk contest. Here’s my list of high-flyers that I want to see in action come February 15.

LeBron James: Obviously. Although his resume is getting more well-rounded, as he has two championships under his belt and four regular season MVPs, he still hasn’t entered a dunk contest. He throws down with the best of them, and needless to say he has the speed, power, creativity, and ferociousness to pound it through the hoop. King James has some amazing highlight reels, but he should really put his creativity to the test and enter the dunk contest at least once before it’s too late. We all want to see him compete, and maybe jump over a person or two and finish with a Dominique-esque windmill jam.

Paul George: Did you see that in-game 360 windmill slam? Did I mention that was in-game? That’s a dunk contest throw down in an actual game. If your name isn’t Vince Carter, that’s not exactly an easy feat. George has definitely made a name for himself in the league, and has also built a reputation for being a fantastic dunker. He’s already been in the dunk contest once, but fell short in winning the competition to Blake Griffin. George, with his 6’9”, 220-pound frame, definitely has a mesmerizing combination of finesse and power. This fearless 23-year-old swingman has all the skills to redeem himself. Sure, he’s denying participation in the dunk contest, but anything could happen.

DeAndre Jordan: He’s got a strong last name, and his dunks are pretty powerful as well. Griffin isn’t the only player on the Los Angeles Clippers to heavily contribute to their Lob City reputation. His dunk over Brandon Knight was just a straight up annihilation. Yes, you do need to be creative in a dunk contest, and I think that Jordan has that creativity in him to go along with the strength. He could also go to Griffin for some dunk ideas and advice for the contest as well. Jordan’s putback dunks and jams off the lob are thunderous, so something along the lines of an off-the-backboard dunk or alley-oop jam could fit D.J. rather nicely in the dunk contest.

Victor Oladipo: Oladipo is only 6’4”, but he’s very athletic. This rookie isn’t really a well-known name, but he is known by quite a few players in the league to punish the rim with some powerful jams. So far in his rookie season he’s already created quite a few posters. On the other hand, he has the ability and confidence to pull off pretty dunks, like a clean 360 jam on a fast break. At this point in his rookie season he’s turning out to be quite an exciting player in the air. Oladipo has already expressed his interest in the dunk contest, and if he gets in this year, we’re most likely in for a treat.

Xavier Henry: The Los Angeles Lakers have been banged up for most of the season, but the upside is that players like Xavier Henry have gotten a chance to bathe in the spotlight a bit. Henry definitely has some ups, and can throw down some monster jams. He’s made some pretty remarkable posters, but people are curious about what else he can do. His jam down the throat of Jeff Withey was in contention for dunk of the year. With a pretty incredible vertical and an athletic frame, the potential he has in the dunk competition is exciting.

Well, those are just a handful of players that should be in this year’s dunk contest. Blake Griffin should come back as well because even though he won in 2011, his dunk over the hood of a car left a bad taste in many people’s mouths. Griffin, Anthony Davis, Gerald Green, and even Dwight Howard would be exciting to watch as well. There should also be a “ya’ll must’ve forgot” version of the dunk contest too so that the older high-flyers of the game, like Vinsanity, can prove that they still have it.