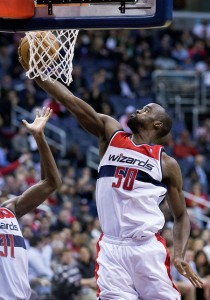 As momentum gathers for the NBA’s Feb. 20 trade deadline, the Phoenix Suns hold one of the league’s most valuable assets for deal partners wanting to save themselves several millions of dollars: the expiring – and insured – contract of injured center Emeka Okafor.

Once Phoenix reached the midway point of its season on Wednesday with Okafor still sidelined with a neck injury, an insurance policy began to take over payment on 80 percent of the remaining $14.4 million on his 2013-14 contract, league sources told Yahoo Sports.

Whoever deals for Okafor before the trade deadline will receive an insurance payout of $5.7 million – roughly $141,000 per game.

For the Suns, the appeal of Okafor’s financially friendly deal – armed with approximately $5 million in remaining salary-cap space – has general manager Ryan McDonough on the search to fortify his roster for a playoff run. Despite the loss of point guard Eric Bledsoe to knee surgery, the Suns – 25-18 and holding the seventh seed in the Western Conference playoff chase – are determined to reach the postseason. Yahoo Sports