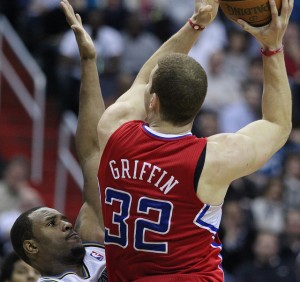 On Monday night the 31-15 Los Angeles Clippers faced off against the 8-25 Milwaukee Bucks. Fresh off claiming their 13th road win of the season in Toronto and surviving 51 points from sophomore guard Terrence Ross, the Clippers walked into the Bucks arena currently 4-2 on their annual Grammys road trip. Milwaukee has gone 1-11 in the month of January. “This is beyond basketball,” said Bucks head coach Larry Drew. “It’s about representing what’s on your chest and what’s on your back.” That wouldn’t stir up enough emotion for the Bucks, who have their sights on the lottery and less on quality wins.

With the temperature dipping to below 15 degrees outside the arena, inside the Clippers planned to continue the hot shooting left over from previous wins in Toronto and Chicago, as the Bucks would try to cope without injured guard O.J. Mayo and forward Larry Sanders. The Clippers have been 9-3 without Chris Paul, compared to 22-12 with him in the lineup for the season, and have scored 109 points per game with Paul sidelined compared to the 105 points with him in uniform.

The Clippers won the tip and got right down to business, going back to Griffin who was stellar on the seven-game road trip. Griffin was fouled on the first possession of the game and headed to the free-throw line, where he’s much improved this season, shooting 71 percent compared to 66 percent last season and 52 percent the year before. The Clippers got out to a 16-7 lead with Griffin in command and J.J. Redick hitting a number of uncontested perimeter jumpers. Redick would finish the game with 14 points on 4-of-8 shooting. The Clippers would close the first quarter shooting 56 percent from the field, including going 3-of-6 from three, two of which were poured in by Sixth Man of the Year candidate Jamal Crawford.

After trailing by nine points in the first quarter, the Bucks got it to 36-34 with nine minutes left, but the closeness would quickly dissipate due to impressive play from Jamal Crawford, who has averaged 23.5 points per game on the Grammys trip. With about three minutes left in the half, the Clippers started to break the game open with increased energy and airtight defense. Blake Griffin led the charge with 18 points in 17 minutes, as the Clippers closed the half with a 64-41 lead and 15 points from Jamal Crawford off the bench. From there the Clippers went on a 21-2 run to lead by as much as 39, with great play from DeAndre Jordan, who had another huge night on the glass, grabbing 18 rebounds and slamming down eight points. The Clippers would cruise to an easy 114-86 win, achieving a 5-2 record on this year’s Grammys road trip, the best in franchise history.

“We were getting stops and getting to the foul line,” Griffin said of the Clippers’ strong play. “We were getting good shots, good open looks, but our defense is what allowed us to do that.” Griffin ended the night with 20 points right behind Jamal Crawford who had a team high 25 points. Crawford recapped the team win: “It’s a really good feeling. We do it together. We always do it as a team. We trust and believe in what Doc (Rivers) and the staff are teaching us.”

The Clippers return home tonight to Los Angeles and will face the Wizards Wednesday at Staples Center.