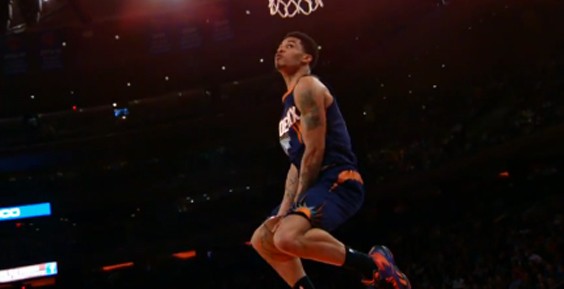 Gerald Green, for better or for worse, is that dude. You know the one. That dude, with the cupcake and the candle and the ridiculous leaping ability. Yes! That’s the one. A sideshow in a circus of genetic freaks, Gerald Green has wowed the NBA with highlights like that one and this one, another of my personal favorites. Green is even missing part of his right ring finger, which he lost while dunking on a doorway hoop, because how else would a young Gerald Green get injured?

Green has had an interesting path to where he is now. He came straight out of high school, getting drafted in the first round by the Boston Celtics, and bounced around, then out, and then back into the league. Now with the Phoenix Suns, Green is having a career year, and he’s doing more than just looking at the rim head on. Green has turned himself into the sort of shooting guard than can play in the league for a long time. Green gets buckets, and he gets them very quickly. I watched him in person on Monday night in Philadelphia, and he was the best player on the court for stretches of the game, recording 12 points and 2 assists by the end of the first quarter and helping the Suns jump out to a 40-26 lead. He gets his points in a variety of ways: mid-range jumpers off screens, spot-up threes, drives to the basket. Green plays off the bench when everyone is healthy, but has spent a lot of time in a starting role due to injuries in the Suns backcourt.

So what has changed in Green’s game to take him from a fringe NBA player to a legitimate sixth man?  A lot of it has to do with the system he has landed in. Phoenix is second only to the shoot-as-soon-as-you-cross-halfcourt Houston Rockets in three-point attempts per game, and this has led to a significant increase in Green’s three-point shooting numbers. He is taking 6.4 three-point attempts per game, more than doubling his career average of three. He’s been able to maintain efficiency while doing so. The 35 percent career three-point shooter has actually jumped to 36 percent, resulting in 2.3 makes per game, again, more than doubling his career output.

Green has been able to shift his game outside without necessarily taking many more shots, but simply taking less poor shots, and more layups and threes.  He has maintained his good-but-not-great shooting percentage of 42 percent, while averaging a career-high 13.5 points per game. Adding to all of this, Green is putting up career highs in blocks, steals, and assists.

The downside is Green’s consistency. Of Green’s 104 three-point makes, 58 have come in 11 games, meaning over 50 percent of his makes have come in just 25 percent of the games he has played in. The Suns winning percentage with Green coming off the bench is .667, while with Green in the starting line-up, it falls to .538. And while a lot of that has to do with whom Green is replacing, it’s not too much of a stretch to think that Green provides much more lift coming off the bench in a Jamal Crawford or Jason Terry role. The risk is much lower in having a player like Green off the bench, because if he starts hitting everything he throws up, your team gets a huge lift, and if he’s off that night, he simply goes back to the bench. With Green’s journey around, literally, the basketball world, one would think that he would surely do whatever it took to stick with an NBA roster, even if it includes a bench role.

The Suns have been one of the best surprises in the NBA so far this season. The backcourt of Eric Bledsoe and Goran Dragic had been magnificent when together before the former’s injury, and the makeshift rotation of bigs has played well in their fast-paced offense. Like many of their players, the Suns simply gave Gerald Green a chance, and he’s making it worth their while.