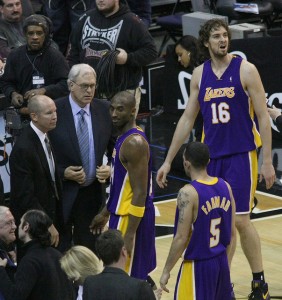 Check it often and absorb the knowledge we’re dropping on you! Magic Johnson torched his favorite team again, telling “Tonight Show” host Jay Leno on Monday night that the Lakers were in a bind largely because they had hired Coach Mike D’Antoni instead of Phil Jackson early last season. “He don’t teach defense,” Johnson said. “I can’t stand to watch the Lakers play because the same play happens every single time on the Lakers — pick and roll and the guard goes all the way in for a layup. “What are we, 40-something games into the season? The teams run the same play on us. We haven’t stopped it yet. Uh, duh.” D’Antoni, whose team had surrendered 100 points or more in 12 consecutive games before facing the Indiana Pacers on Tuesday night at Staples Center, declined to address Johnson’s comments. “I don’t have anything to say,” D’Antoni said. “I mean, there’s no use to address it.” But isn’t the criticism hurtful? “Oh, yeah. It doesn’t help me,” D’Antoni said. “But that’s not up to me to say.” The Lakers were giving up an average of 106.1 points per game before Tuesday, second-worst in the NBA. Compounding their defensive problems have been the extended absences of Kobe Bryant, Steve Nash, Steve Blake, Jordan Farmar and Xavier Henry because of injuries. Los Angeles Times