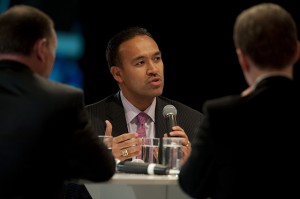 The person requested anonymity because he was not authorized to speak publicly until the announcement is official. NBA spokesman Tim Frank declined comment.

The move needs to be approved by NBA owners, but a decision such as this wouldn’t progress to this point unless Silver, the deputy commissioner who takes over for commissioner David Stern this week, knew Tatum would be approved.

Tatum, who joined the NBA in 1999, would become one of pro sports’ highest-ranking African-American executives. He received his undergraduate degree from Cornell and graduated from Harvard Business in 1998.

He has been instrumental in the game’s global growth but has also been involved in collective bargaining, TV deals and partnerships with major sponsors. He has been on the NBA’s senior management team for about 10 years and also works closely with USA Basketball executives on the organizations marketing and sales. USA Today