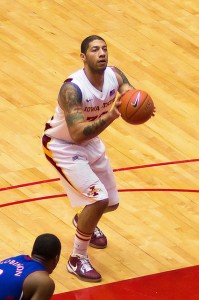 Royce White is the NBA draft’s “worst first-round pick ever,” according to the man who picked him.

Houston Rockets general manager Daryl Morey selected White with the 16th overall pick in the 2012 draft, but White has yet to appear in an NBA game.

“I take some sort of pride in that you could argue that Royce White is the worst first-round pick ever,” Morey said in an interview with Rockets blog ClutchFans.net.

The 6-foot-8 White has struggled with an acknowledged anxiety disorder that would make it a challenge for him to play a full NBA season.

“He’s the only one that never played a minute in the NBA that wasn’t just a foreign guy staying in Europe,” Morey said. “It just shows we swing for the fence.”

Even though Morey considers the selection of White to be a blunder, the pick didn’t hurt his career as a GM too much. The Rockets could afford to take a risk on White because they had three first-round picks in 2012. They had already drafted Jeremy Lamb with the 12th pick, and then selected Terrence Jones with the 18th pick. ESPN

Why can’t Anthony Bennett get a fair shake in the “worst first-round pick ever” awards? Bennett was the 2013 No.1 overall pick and is averaging 2.8 PPG, 2.4 RPG, and 0.4 APG with a 2.33 PER. He’s so bad that memes like this came up to celebrate his first double-digit scoring performance after 33 games:

Give credit to the rookies too, Morey! – AL