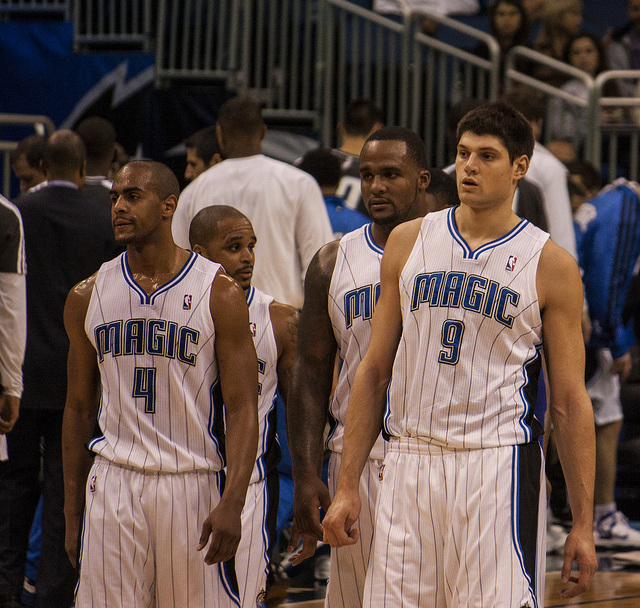 After losing the first two games on a three-game road trip, the Orlando Magic traveled north of the border to take on the Toronto Raptors. The meeting was the first of three between the Eastern Conference foes with the Raptors taking home a convincing 98-83 win on Wednesday night. The loss pushes the Magic’s record to 12-35, while the Raptors sit at 24-21 and third in the Eastern Conference standings.

Toronto came out firing early, knocking down shot after shot. The Raptors knocked down 12-of-22 attempts in the first quarter, including a sizzling 8-for-8 from three. Orlando seemingly couldn’t find an answer for the Raptors’ hot shooting, falling down by 13 at the end of the quarter.

The second quarter saw much of the same for the Raptors with shots falling early and often. While both their field goal and three-point percentages fell in the quarter, their ability to knock shots down consistently and not let the Magic get any real momentum going allowed them to grow their lead heading into the halftime break. Toronto was able to expand their lead to as many as 17, before finally settling in with a 15-point lead at the half.

Coming out of the break, the Magic seemed to find some life, knocking down shots early to cut the Raptors’ lead to eight. However, Toronto was able to answer, pushing the lead back to double-digits before you could blink. While they were unable to knock down shots consistently, Toronto was able to keep their lead in double digits.

The start of the fourth quarter was a sloppy one, with turnovers and missed shots on both ends. The Magic were unable to capitalize on the Raptors slow start to the final quarter, which allowed the Raptors to hold control of the game. Seemingly whenever they needed a basket, the Raptors were able to get it, holding on for a 15-point victory.

Toronto was able to control the game from the opening tip, thanks in large part to Kyle Lowry. Lowry, who could be named to his first NBA All-Star team on Thursday, torched the Magic, finishing the game with 33 points, 11 assists and seven rebounds. Lowry was untouchable early, scoring 17 in the opening quarter, including five deep balls. Amir Johnson quietly notched a double-double, finishing with 22 points and 11 rebounds, while fellow big Jonas Valanciunas finished with 14 points and 15 rebounds. Terrence Ross rounded out the Raptors who finished in double figures, scoring 12 on the night.

From the start, the Magic appeared to be outmatched. Nikola Vucevic, playing for the first time in three weeks, led the Magic for the night, notching yet another double-double with 16 points and 10 rebounds. Vucevic was one of three Magic players to shoot over 40 percent, but was the only one to finish in double figures. Guards Jameer Nelson, Victor Oladipo and Arron Afflalo all finished in double figures, notching 13, 12 and 10 respectively. However, the three shot an abysmal 12-of-30 on the night.

Vucevic Returns
After missing three weeks with a concussion, his second in ten months, center Nik Vucevic returned on Wednesday night. It was unknown when Vucevic would return, but his return was a welcome site to the Magic and their fans. Vucevic didn’t disappoint either. Playing with a minutes limit, the big Montenegrin finished with a double-double, and was the lone bright spot for the struggling team. It’s big for the Magic to get Vucevic back and fully healthy if they want to see more success as the season grows longer. He’s one of the team’s most important players, and getting him back and healthy could be the boost the Magic need to see some more wins.

Poor Perimeter Defense
From the start, the Raptors were firing, knocking down shot after shot. While many of the attempts were contested, a handful of them were uncontested wide open looks. All season, the Magic have struggled defending the three-point line, and the perimeter, and it was exploited once again on Wednesday night. Toronto knocked down 14 threes, including their first nine on the night, including six from Lowry. The Magic have athletic guys who can play lock down defense on the perimeter, but they seemingly can’t get the stops consistently. Some of it is learning how to play together, but we’re at a point in the season when they should be able to and do it consistently.

Stat of the Night
Toronto won the rebounding battle handedly, out-rebounding the Magic 54-39 on the night.